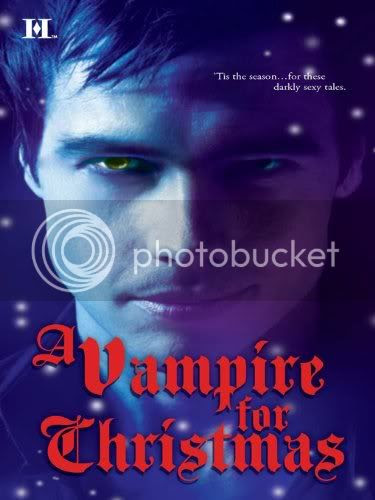 A Vampire for Christmas:
Available now from Harlequin, Amazon, Barnes and Noble


All they want for Christmas is you…


It's the time of year for twinkling lights on trees and kisses under the mistletoe. Yet the passing of another year means nothing to the stunning immortals who lurk in the shadows of the new-fallen snow.

And they don't care if you've been naughty or nice.

Let four fanged lovers open your eyes to a passion you never dared to imagine. After all, there's no place like home for the holidays—and these dazzling vampires can't wait for an invitation.

I've never read a anthology Christmas paranormal book before. This was new for me and i enjoyed trying it out. There are four stories by four great authors but it was kind of hit or miss for me. The first one Enchanted by Blood by Laurie London was pretty good. I like the idea of the vampire that's a corporate guy and a man in charge. Poor guy had to give up his true love for duty or so he thought. A chance run in with her a year later and he's in the soup all over again but this time he doesn't want to let her go. Give it a A! The 2nd one is Monsters Don't do Christmas by Michele Hauf was OK but not my favorite. The guy Daniel was a big shot before a late night attack left him a vampire and then he started feeling sorry for himself. He was a good guy but he was slightly wimpy in my mind. Olivia was just not that believable to me. I know it's fiction but her character didn't work for me. The story was enjoyable but not my favorite. I'll give is a C. The 3rd is When Herald Angels sing by Caridad Pineiro.  This one was good but probably could have been a whole lot better as a full story instead of a novella. It could use a lot more details and well time. Everything happens quickly. Reminded me of the movie A Christmas Carol. Kind of the same concept but with vampires. The guy Damien has had a hard life and lives his life rough but the Archangel Raphael thinks he could be redeemed and enlists Angelina as his guardian angel to help him find the error of his ways. Turns out they both needed to learn a lesson. Good read. I'll give it a B. The last one was my favorite. All i want for Christmas by Alexis Morgan. Might be my love of Alpha males but i loved the characters in this one. Eaghan is a hotter than hell vampire cop. He's trying to bust some vamps who are being bad and has to use the diner owned by Della as cover. Problem is they are attracted to each other and Della is human. She doesn't know about vampires or werewolves and fae. She's going to find out because they are all around her. This one would be awesome as a full book. By far my favorite. I'd give it a A! The book as a whole was enjoyable and of the four authors i have only read  one before so it was a intro to the other authors writing as well which is always a neat side effect to anthology books. I give A Vampire for Christmas 3 and 1/2 Modokker Book Pick stars.