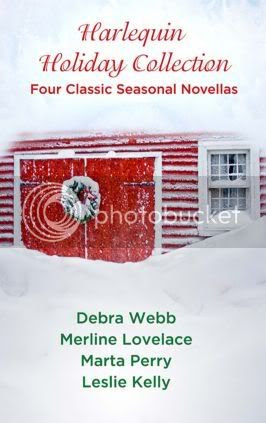 Review by Sarah
Back of the Book Blurb:


A struggling B&B owner scrambles to hide the dead body wrapped in her Christmas tree from a visiting camera crew—and from her still-irresistible reporter ex. A waitress and a sexy FBI agent mix business with pleasure while investigating a crime over the holidays. A crime lab worker finds herself in danger six days before Christmas...and only her off-limits but oh-so-attractive coworker can help. And two childhood friends rediscover their sense of wonder—and love—when reunited for the holidays.

Seduced by the Season by Merline Lovelace (2008)

Review: Released as a free e-book in 2011, this collection includes four holiday-themed romance novellas. They were a fun, fast read and the first three were pretty good.

And a Dead Guy in a Pear Tree is the story of Zach and Holly, two college sweethearts who haven't seen each other in eight years, since they had a huge argument and misunderstanding. Holly has returned to her hometown and has turned her grandparents' mansion into a bed and breakfast. But the B&B isn't doing well, and her last chance to save the family home is to get good publicity from a famous TV travel show. But right before the TV crew shows up, a dead guy pops out of the Christmas tree she's just bought. Turns out he was an escaped criminal, and Zach, now a crime reporter, has tracked him to his hometown. He and Holly soon reunite, sparks fly, and there are some genuinely funny, zany shenanigans as they try to hide the dead guy until after the travel show has finished filming. This novella was fun, cute and sexy.

Seduced by the Season takes place in Dublin, Ireland and is notable for creating a very strong sense of place in a short story, using lots of history and detail to transport the reader into the story. Clint is an FBI agent on the trail of an art thief, and Sophie is a waitress at the local tavern. Clint is feeling out of his league on this case, as he knows nothing about art. When he learns that Sophie is working her way through her PhD in Irish art, he enlists her assistance to use her expertise. The fact that they are both incredibly attracted to each other adds romantic suspense to the story. Sophie is a bit of an odd character, as she is an American who likes to speak with a thick Irish brogue at times, but overall this was an entertaining and lovely story.

Evidence of Desire is the story of Olivia and Jacob, two crime lab forensic scientists. Olivia has just relocated from Boston, and has the hots for Jacob, who has shown zero interest in her. When Olivia starts to experience a string of suspiciously bad luck (car won't start, work goes missing, computer issues, she's being followed), Jacob helps her out and Olivia decides to throw herself at him, hoping for the best, in spite of the fact that her new workplace discourages office romances and Jacob has been little more than brusque with her. So although that felt stalkerish/forced, the mystery of Olivia's "bad luck" was well done and left me guessing until the end.

Season of Wonder is the only dud in the collection. It is the shortest of the four or else I wouldn't have finished it. Allison has returned to her family's island cottage to prepare it for selling. She is accompanied by her daughter, and is recovering from a divorce. When she gets to the island after an absence of 15 years, she soon meets up with her childhood friend David, who has been in love with her his whole life. Before their initial conversation is over David has agreed to be her free handyman thinking she's moving back, and Allison decides not to tell him she's getting it ready for sale. Nice, huh? Allison is condescending and snarky, and David keeps wondering what happened to his "angel-girl". His "angel-girl" says things like "I see you still say 'Hey' instead of 'Hi'" - so of course David mends her cold, broken heart and there's a happy ending. It was stiff, awkward and hard to read.

3 out of 5 Modokker Book Pick Stars