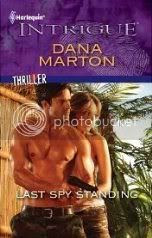 Black ops specialist Mitch Mendoza had thought this South American rescue mission would be routine. But the jungle held unexpected dangers: deadly snakes, armed drug runners and Megan Cassidy. The undercover CIA agent had legs for miles and a hidden agenda—one that interfered with Mitch's plans. So though he was a lone wolf, he had to keep her close, or risk letting his mission fail. After years of working alone, Mitch found himself distracted by Megan's steely resolve and her soft curves. And he couldn't afford that. Not if he wanted this assignment to be a success…and get both of them out of the jungle alive.

This is another face paced actioned packed adventure book from Dana Marton. There are no wasted pages or words in this book. Mitch and Megan are both the good guys but neither one knows that about the other.
Megan works for the CIA and has been undercover for a year. She has another hidden agenda for her mission as well. Her brother is held captive she believes by a major bad guy and she needs to get into his compound to find him. Mitch has a mission two get a snot nosed kid ( by his standards) out of the compound of a drug lord that Megan has infiltrated for the past year. He breaks him out but Megan gets him back and a kind of tug of war goes on through the whole book.  Somehow Dana Marton gives a bigger book feel to a short page book. I don't know how she does it but it works. There was a sad surprise at the end that broke my heart but you also get the happy ending you hope for. 4 out of 5 Modokker Book Pick stars for Last Spy Standing by Dana Marton.


Find out more about Dana Marton and her books by visiting her website here www.danamarton.com . You can read a excerpt of this book there as well.
Posted by Modokker at 12/21/2011 01:00:00 AM