Book review and interview: Because of you by author Jessica Scott 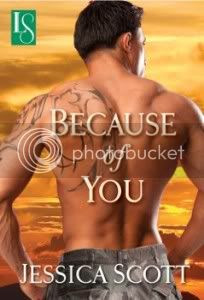 
“Keeping his men alive is all that matters to Sergeant First Class Shane Garrison. But meeting Jen St. James the night before his latest deployment makes Shane wonder if there’s more to life than war. He leaves for Iraq remembering a single kiss with a woman he’ll never see again- until a near fatal attack lands him back at home and in her care. Jen has survived her own brush with death and endured its scars. And yet there’s a fire in Shane that makes Jen forget all about her past. He may be her patient, but when this warrior looks her in the eyes, she feels – for the first time in a long time – like a woman. Shane is too proud to ask for help, but for Jen, caring for him is more than a duty -it’s a need. And as Jen guides Shane through the fires of healing, she finds something she never expected – her deepest desire.”

Review:
I was a bit nervous and excited to read this book. Wait and waited patiently for it to come out and went right to Amazon and downloaded it when it did. I read the Prologue and then i let it sit It sat some more til the weekend and ok wait it sat some more until i got over myself and picked up and started reading. I was afraid after hearing everyone say they cried it would be to emotional for me. I wasn't in the mood for that so in my head i debated for almost a week. I never heard anything bad about it so that wasn't a problem. Through the whole book i kept waiting to get hit with some big emotional thing that would overwhelm me. Thing is i read the whole thing and didn't cry even once.  It's definitely not that nothing big happened in the story because the whole thing was big for me. It was a journey for more than one person. You have Shane who is the alpha GI Joe man all the way. He feels responsible for every man under his command and well just about everyone he knows too. Sounds like a pretty good guy huh? Problem is he can't control everything so when something bad happens he blames himself. Then you have Jen the nurse who is there for everyone but still has issues with her bout from breast cancer a few years before. Shane meets Jen the night before he and his unit are to deploy to Iraq again. Sparks fly but what can you do when one of the two is leaving for months and months? A few months go by and things are intense in Iraq worse than Shane thought it would be. Suddenly he and two of his fellow soldiers under his command are seriously injured and sent back stateside where wouldn't you know it Jen is working at the military hospital as a nurse.  From there the two start a journey to finding themselves and each other and why sometimes you have to trust someone else and believe in yourself. Shane and Jen are the main characters in this book but you get introduced to several other characters who have a impact on the story and i suspect the main characters in future books.  The characters are so read you feel you know them by the end of the book.  The story is so well written i didn't feel at anytime the need to roll my eyes at something that doesn't sound right. Jessica leads you right to the end of the story and then snags you with a ending that makes you excited for the next one. You want to know what happens to all the characters. I know i do. 5 out of 5 Modokker Book Pick stars for Because of You by debut author Jessica Scott. Read more about Jessica and this book and her future projects here. www.jessicascott.net
Find Jessica on Twitter JessicaScott Facebook JessicaScottAuthor Goodreads JessicaScott/goodreads

Below is a short interview with the wonderful Jessica Scott. enjoy! 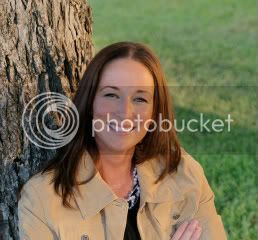 1 What made you decide to write a military romance? Was it hard to get into considering what your day job is?


It wasn't hard for me to get into, honestly. The hard part was pulling from daily life and keeping things separate, you know? I can't seem to *not* write about soldiers. I've tried and written exactly one book that doesn't have military characters in it (and it will never see the light of day:). Apparently, my line into the collective unconscious is through writing about soldiers and I wouldn't have it any other way. I love what I do on both counts. Being a soldier is an honor and a privilege it's something I take incredibly seriously.

2 What's it like for you to have your spouse in the military also. Have you ever deployed at the same time? Did you meet your husband because of the military? PS That's where i met mine.

My husband and I deployed during OIF 09-11 in Mosul as part of 1st Cavalry Division. It was interesting to be in the same unit, that's for sure. I think we made it work and the really cool part about being deployed at the same time was that we kind of got to be a couple again. No kids. No housework. Just, you know, a war going on around us. But we made it work. It's always tough, though, being the spouse at home, worrying about your loved one forward. I can see both sides of it, you know? Being deployed is simpler, but not easier by any stretch. And being at home, while maybe not as dangerous, is arguably more stressful because you're mom, dad, everything falls on you to get done. It's a lot.

3 How did you research for this book? I imagine you have some of your own experience to draw on but did you have to look for more info is so where?

The military stuff wasn't all that tough for me to find out. I definitely got some funny looks from my brigade surgeon when I asked him about the best way to kill yourself with a weapon and about drug interactions while we were deployed. I promised him that I was writing a book and he was game, but still, I think he wondered. The medical stuff was a lot tougher to dig into. I had to pull from medical journals some of the medical stuff about Shane's leg injuries and I did a lot of research into people who thrived with amputations. A huge book for anyone wanting to see one man's perspective about life after amputation is Bryan Anderson's No Turning Back. Talk about inspiring.

4 If there is one thing that people misunderstand about the military or military life what is it?

Wow, there's so much we misunderstand about each other. There was an article written by a senior spouse military wife who was basically telling all the wives of today's war generation to suck it up, life isn't that bad. Well, she was a military spouse in the 80s and 90s when the worst thing she had to live through was a year of her spouse moving to Korea, not back to back rotations year after year. So it's hard to say where people misunderstand the most. I don't think the media portrays situations accurately when they say "the Army" did this or that. Ultimately, it's not "the Army" that did something. It's a specific chain of command. It's people. Does that make sense?

5 tell us 3 random things about yourself. Then tell us little about the next book in this series if that's possible.

Ack, three completely random things? Um, I have big feet. I'm kind of a cosmetics whore. And I love a good post apocalyptic anything (book, movie).

The next book in the series is a MUCH easier question to answer seeing how I just turned it in this week (whoot!). BACK TO YOU picks up where BECAUSE OF YOU leaves off. Laura Davila has been waiting for her husband to come home from war for years and finally, she's had enough. She sends her husband Trent divorce papers (a major taboo for military wives and sadly, an all too common occurrence) while he's deployed and he comes home to try and salvage their marriage. She has to learn to trust not only that he loves her but that he's capable of staying home long enough to learn to adjust to life outside of combat. It's a reunion story that really asks the question what is worth fighting for?
Posted by Modokker at 12/02/2011 01:00:00 AM