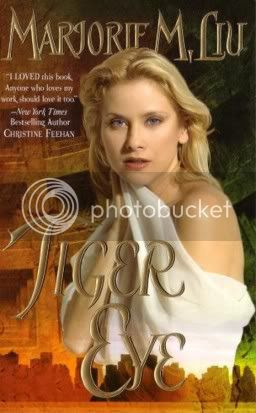 Review by Sarah
Back of the Book Blurb:

Long ago they roamed the earth — dragons, tigers . . . shapeshifters — men who wore the forms of beasts. Their world was magic. Now it is gone. But some remain . . .

He looks out of place in Dela Reese's Beijing hotel room— exotic and poignant, some mythic, tragic hero of an epic tale. With his feline yellow eyes, he's like nothing from her world. Yet Dela has danced through the echo of his soul and knows this warrior will obey her every command.

Hari has been used and abused for millennia. But he sees, upon his release from the riddle box, that this new mistress is different. There is a hidden power in Dela's eyes—and with her, he may regain all that was lost to him. Where once he savaged, now he must protect; where before he knew only hatred, now he must embrace love. Dela is the key.

For Dela, he will risk all.
Review: This is Liu's debut novel (2005) and the first book in the Dirk & Steele series (about a secret psychic detective/security type agency). It's a fun, fast read full of romance, action, magic and danger and I zipped right through it. As the novel begins, Dela is in China and buys an ancient puzzle box from a mysterious old woman. She is quickly assaulted by a creepy man who wants the box, but escapes and returns to her hotel room, where she opens it and out comes Hari. Hari is a seven foot tall hunky tiger shifter who was cursed to be imprisoned in the box over two thousand years ago, and is released as a slave to whoever buys and opens the box. Dela is horrified by Hari's story and promises to give him his freedom and try to break the curse. But before they can figure anything out an assassin comes to Dela's hotel room and attacks her. Soon Dela and Hari are being pursued by both an unknown assassin and an evil mage, and they head to the United States, where Dela has an extensive family and friend network of fellow psychics of varying abilities who are able to protect her and figure out who wants her dead.

The characters are really well developed in this book - Dela, Hari and the rest are believable, interesting, multi-dimensional, full of quirks and foibles. The relationship between Dela and Hari develops easily and naturally as they get to know each other, building trust, respect, affection and lots of lust. Liu can write sexy scenes with the best of them, and those scenes combined with a real sense of danger, and genuine humor as Dela brings Hari up to speed on the 21st century (he was last let out of the box 600 years ago), mark Liu as one of the best writers of paranormal romance. I've read several of her books, but this was the first Dirk & Steele book for me, and I am very excited to read the rest. Tiger Eye introduced at least a half dozen characters whose stories I can't wait to read.
5 out of 5 Modokker Book Pick Stars