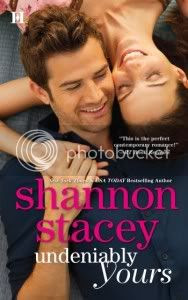 Available in ebook for only right now. Pre order for paperback now for Feb. 2012 release

Bar owner Kevin Kowalski is used to women throwing their phone numbers at him, but lately he’s more interested in finding a woman to settle down with. A woman like Beth Hansen. If only their first meeting hadn’t gone so badly…

Beth’s tending bar at a wedding when she comes face to face with a tuxedo-clad man she never thought she’d see again. She tries to keep her distance from Kevin but, by last call, she can’t say no to his too-blue eyes or the invitation back to his room. Then she slips out before breakfast without leaving a note and, despite their precautions, pregnant.

Kevin quickly warms to the idea of being a dad and to seeing where things go with Beth. After all, he’s not the player she thinks he is. But she’s not ready for a relationship and, given his reputation, it’s going to take a lot to convince her to go on a second date with the father of her child…

This is the 2nd book in the Kowalski series.  For some unknown reason I've been reading these backward. I read book 3 months ago and now this and book one will be next. Pretty sure they would be better in order but I haven't had any real problems reading them my backward way. lol This book focuses on Kevin Kowalski. Six foot two and sexy as all get out bar owner. He doesn't take any BS from patrons in his bar so when a man gets a little drunk grabby with a woman who appears to be his date he attempts to save her from him. All is not what it seems and the man is the woman boss instead. The drunk and slightly disorderly guy ends up with a broken nose and the woman ends up fired from her job. That woman being Beth Hanson who is a wanderer by nature or so she thinks. She likes to travel and find jobs to pay her way as she moves from place to place.  They meet again at Kevin's brothers wedding and sparks fly and after a hot night of sex Beth runs off when she thinks she just one of Kevin's many women. Turns out she's pregnant though and when Kevin finds out he's excited and wants a relationship with Beth. Beth resists often. This book made me laugh a lot. I just love the Kowalski family they are such a big boisterous family and Beth is a only child and a over protected one at that which causes her need to roam. Kevin and the Kowalski clan slowly teach her what a big loving family can give her and that it's time to quit moving around and settle down. The only thing that bugged me about this book is the continued harping on Kevin by Beth about all the cocktail napkins he gets from women in the bar with their phone numbers on them. Grated on my nerves toward the end but the ending made up for it with the way Beth finally decided she loved Kevin and wanted to be with him permanently. Way sweet and a great read too. 4 out of 5 Modokker Book Pick stars for Undeniably Yours by Shannon Stacey.

To find out more about Shannon Stacey, this series and her other books click here www.shannonstacey.com .
Posted by Modokker at 12/22/2011 01:00:00 AM