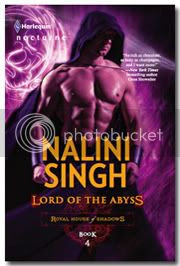 This review by Sarah.


Once upon a time…the Blood Sorcerer vanquished the kingdom of Elden. To save their children, the queen scattered them to safety and the king filled them with vengeance. Only a magical timepiece connects the four royal heirs. Now they must return and save Elden…and time is running out….As the dark Lord who condemns souls to damnation in the Abyss, Micah is nothing but a feared monster. He has no idea he is the last heir of Elden. Only one woman knows—the daughter of his enemy. Liliana sees past his impenetrable black armor to the prince inside. To help Micah remember, she must brave his dark, dangerous lair. Because they only have until midnight to save Elden.

Review: Lord of the Abyss is easily my favorite book in the House of Shadows Series, a four book series published by Harlequin Nocturne. Each of the books is the story of a royal heir of Elden, who are four siblings separated by magic during the bloody massacre of their parents and the conquest of their kingdom. The stories can be read as stand-alone books, but there is a well-constructed framework linking them together, as the heirs of Elden are running out of time to reclaim their kingdom. Lord of the Abyss is the story of Micah, the youngest, and ends with the final battle between Micah and his siblings and the evil Blood Sorceror.

Written in a lush and rich style, Lord of the Abyss starts with a bang as Liliana magically arrives in the Black Castle, home of Micah, who is now the title character with no memories of his life before he became the Black Lord. Liliana knows that time is running out for the heirs of Elden - if they don't return to Elden and defeat the Blood Sorcerer, Elden will fall forever. Liliana is desperate to help Micah remember his past in time, but it is a dangerous business, as his memories are linked with pain and twisted sorcery.

The book has many elements of the classic "Beauty and the Beast" fairy tale, with Liliana as the ugly one and Micah as a fair haired god of a man hidden behind his black armor. Liliana barters her survival for her cooking skills, and she soon begins to unintentionally seduce Micah with her amazing cooking and her brave, stubborn intelligence and personality. Because Liliana was tortured her entire life by her father, she has no fear of the Lord of the Abyss, and is quite comfortable telling him no and bantering with him. Micah has never encountered anyone who didn't fear him, and is fascinated by the brave Liliana. As her delicious cooking begins to trigger sensory memories of his childhood, he finds himself drawn to Liliana and slowly falls in love with her. Liliana is shocked and nearly overcome by the attentions of Micah. Told her entire life that she is ugly and odd, she is confused by his straightforward attraction to her. The buildup of trust, respect and attraction was really well done. I found it believable, touching and sexy and could not stop reading this delightful story. Adding to this is a sense of suspense, as time is running out and the Blood Sorcerer is hunting Liliana. The final battle, the reunion of the siblings and the fate of Elden was resolved in an exciting and very satisfying manner. Good stuff!