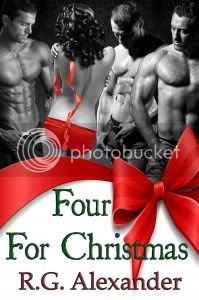 Dreaming of a White Christmas led her straight into their arms…


In this holiday spin off of the bestselling novella Three For Me? Saving a man in a snowstorm leads Georgia Bale to an isolated cabin, where three men have an important promise to keep. A promise Georgia soon becomes caught up in herself.

She just wanted to survive Christmas, and her bad holiday karma. She had no idea that accepting a friend’s invitation to Colorado would lead her to her perfect man. Times three.

What does an eccentric writer do when a compassionate doctor, a dominant police officer, and a handsome adrenaline junkie only have eyes for her?

But when the storm clears, she’ll have to decide which path to take. The way back home, or the road less traveled.

Warning: A bit of heart tugging, excessive use of imagination, role playing (the dirty kind), foursomes, holiday magic, a guardian angel or two… and the kinky use of holiday themed beverages.


For starters i really loved the cover of this book. Covers are usually what first attracts me to a book. This one pops right out at you. I like all kinds of romance related genre's including erotica. It's not often as emotional as this one was. Georgia used to love Christmas and then suddenly it seemed to suck every year. She couldn't get into the spirit of it. She decides to visit her friend in Colorado for Christmas in the hope this year it would help her mood. In the mountains of Colorado in a snow storm she is a little lost and ends up with a flat on her rental SUV. Her faith dog Roux ( Isn't that the cutest name) gets out with her to change the tire and Roux runs off and finds a man in the snow. She ends up saving him and his foster brother ends up saving her when she starts feeling the effects of the cold in her southern outerwear. This sets her up in a cabin with 3 foster brothers. A doctor, a policeman and a adrenaline junkie. Three big ole strapping guys who of course are sexy as hell and as sweet as they come. She find herself attracted to all three and they to her. Her best friend is in a relationship with a guy and a girl, but is something like that for her?  This is the erotic part of the story but the heart tugging comes later. The three foster brothers ( Chris, James and  Flynn) used to be four. One was in the Marines and didn't make it home but he sent these gifts and letters to his brothers every year and this year they had the last one he sent.  Georgia had this awesome grandpa that used to tell her stories about her grandma that she never met.  He was a wonderful man with a big heart and somehow the grandpa and the other Foster brother ( Nick) links them all together. I won't tell you how because you need to read the book to find out but i had a few OMG OMG moments and it wasn't from the sex scenes which were fantastic btw. lol  This was one of the best erotica romances I have read.  There is great sex scenes, good connections between the characters and a kick ass story to go with it all. I read this in  one sitting and was sad to see it end. I am going to be buying the novella related to this one to read. The first chapter is at the back of this one for you to get a peek at. 5 out of 5 Modokker Book Pick stars for Four for Christmas by RG Alexander.

Find out more about RG at her website here www.rgalexander.com . You can also find her as part of the Smutketeers blog with a bunch of Fabulous authors here www.smutketeers.com .
Posted by Modokker at 12/23/2011 01:00:00 AM