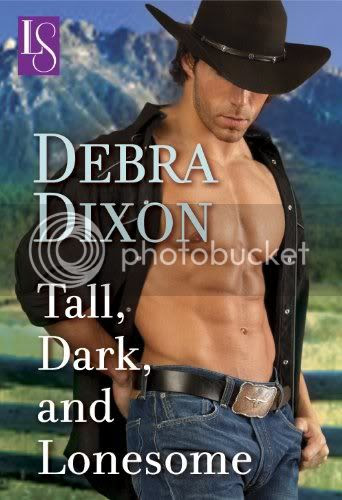 ZACH - A Confident Cowboy Who Staked His Claim, Then Dared Her to Deny It...


He was the perfect symbol of the West, columnist Niki Devlin decided, but rugged trail boss Zach Weston made her forget to breathe! Still pained by the scandal that haunted her past, she'd reluctantly returned to Wyoming to write about his vacation cattle drive, but from the moment he pulled her from the mud into his arms, she wanted to scorch his iron control--to play with the fire in his gray eyes.

He Branded Her with His Gaze, and with His Lips

Zach wasn't looking for a trail romance, but he couldn't hold the feisty flirt and not kiss her until she moaned his name. He wanted all of her, every bit he could touch and taste, every secret and every sigh, but Niki knew she'd destroy his dreams of happy-ever-after once she confessed the truth. Zach told her she could keep running forever, or she could finally stop--but was she ready to be lassoed by love?

This is a shorter book just 224 pages. The Loveswept line was relaunched this past summer and i believe this was one of the first books in that line re-issued with a sexy new cover. Nikki writes for a newspaper and her boss sends her to Wyoming to ride with a cattle drive vacation that people from all over do to get away from their lives. Nikki has a past in Wyoming right there where the cattle drive ranch is. Years later after some awful happened to her she is still paying the price if no where but in her own head. Zach owns the ranch and is rich and is looking to run for the Wyoming State senate. Exactly what Nikki doesn't want. A public life. She's spent years hiding from the public especially the Wyoming public. Zach is intrigued by Nikki. She's not what he expected to find when he meets her. She tough and capable and hiding something. The sparks starts flying right away though and both fight it for a while until they just can't anymore.

I liked this short little read. The only real clear signal that it's dated is the mention of acid wash jeans a couple times. Other wise i don't think you can tell this is not a new book. I enjoy by cowboy books and this is definitely a nice little cowboy read.  I liked the cattle drives scenes and the two dogs were one of the highlights of the book. Brass and Snicker were the two prize Australian trail dogs that worked with Zach to move the cattle.  Nikki spends her time berating herself for past sins and Zach once he gets over himself tries to get her to see it doesn't matter. The one problem i had was considering what happened to Nikki in her past she has unprotected sex with Zach. Not once but twice. I thought i missed the part about condoms or at least are you on the pill, but it never happened.  Might be the dated 1992 first release showing. All in all i enjoyed the book. 3 out 5 Modokker Book Pick stars for Tall, Dark and Lonesome. Find more info on this book by checking out Debra Dixon's website by clicking here.http://debradixon.com/books/TallDarkandLonesome.html
Posted by Modokker at 12/20/2011 01:00:00 AM