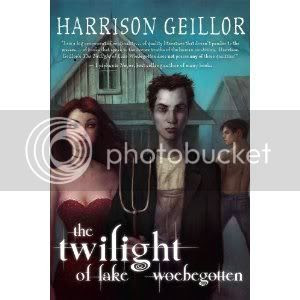 Back of the Book Blurb: A small town... a plucky heroine, a shiny vampire, and a hunky Native American rival with a secret. But all is not as it seems in Lake Woebegotten. Let Harrison Geillor reveal what lies beneath the seemingly placid surface. You''ll laugh. We promise. When Bonnie Grayduck relocates from sunny Santa Cruz, California to the small town of Lake Woebegotten, Minnesota, to live with her estranged father, chief of the local two-man police department, she thinks she''s leaving her troubles behind. But she soon becomes fascinated by another student - the brooding, beautiful Edwin Scullen, whose reclusive family hides a terrible secret. (Psst: they''re actually vampires. But they're the kind who don''t eat people, so it''s okay.) Once Bonnie realizes what her new lover really is, she isn't afraid. Instead, she sees potential. Because while Bonnie seems to her friends and family to be an ordinary, slightly clumsy, easily-distracted girl, she's really manipulative, calculating, power hungry, and not above committing murder to get her way - or even just to amuse herself. This is a love story about monsters... but the vampire isn't the monster.


Review: This is a brilliantly twisted sendup of Stephenie Meyer's Twilight series. Bella Swan has been transformed into Bonnie Grayduck, a smart, self-aware sociopath who has arrived in Lake Woebegotten for her senior year of high school. Bonnie murdered a couple of classmates back in Santa Cruz, California, and while there is no evidence tying her to the deaths, there is plenty of suspicion, so spending a year with her police-chief father is very convenient. And as a sociopath, it's all about self-serving convenience for our Bonnie. Edwin is still the pale, gorgeous, brooding mysterious vampire, but as with Bella, the author has taken the minor personality traits and switched them to become the dominant ones. Edwin is old-fashioned, priggish, has a thing for live teenage girls, and his concern for hurting Bonnie in the throes of passion does not prevent him from enjoying certain "services".

The story unfolds through the viewpoints of two narrative voices: the first-person journals of Bonnie, and the omniscient Narrator, who occasionally interjects to clarify or fill in background. Bonnie's narrative voice is cold and clear like a brook in winter. All of the people in her life, including her parents, are "cattle" or puppets, to be manipulated and used to further Bonnie's goals. And she definitely has goals! First and foremost she must maintain an appropriate persona in order to blend into society, and her favored one is the slightly shy, clumsy pretty girl. Bonnie believes this also gives her the advantage, as others will not expect her to be vicious and strong should she need to kill them. Her main goal, though, is to be turned into a vampire, by Edwin, with whom she has an infatuation. Inasmuch as she is capable, Bonnie believes she has feelings for him, but the main appeal of Edwin is that he is her "ticket to superpowers and immortality and becoming an apex predator".

Bonnie's consistently cold, predatory, self-serving narcissism (yep, I'm aware of that redundancy but I like it) is so refreshing as the events of the Twilight series unfolds. Her calculating nature is always running scenarios of manipulation, all to her advantage. Bonnie learns that she is not the biggest monster in town, and as with herself, he is all too human. Bonnie soon has her capable hands full as she juggles two vampires who want to kill her, maintaining a semi-fake relationship with Edwin in the hopes he will turn her into a vampire, hiding her past, and keeping up appearances as a teenager for her father and classmates.


The humor in this story was unexpected and truly laugh out loud funny. Consistently tongue-in-cheek, dark and devious, and true to the sociopathic, predatory nature of Bonnie Grayduck, The Twilight of Lake Woebegotten was a fiendish delight! 5 out of 5 Modokker Book Pick stars.