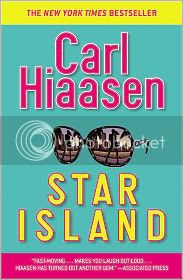 
Meet 22-year-old Cherry Pye (née Cheryl Bunterman), a pop star since she was fourteen-and about to attempt a comeback from her latest drug-and-alcohol disaster.

Now meet Cherry again: in the person of her "undercover stunt double," Ann DeLusia. Ann portrays Cherry whenever the singer is too "indisposed"— meaning wasted — to go out in public. And it is Ann-mistaken-for-Cherry who is kidnapped from a South Beach hotel by obsessed paparazzo Bang Abbott.

Now the challenge for Cherry's handlers (über-stage mother; horndog record producer; nipped, tucked, and Botoxed twin publicists; weed whacker-wielding bodyguard) is to rescue Ann while keeping her existence a secret from Cherry's public — and from Cherry herself. The situation is more complicated than they know. Ann has had a bewitching encounter with Skink, the unhinged former governor of Florida living wild in a mangrove swamp, and now he's heading for Miami to find her . . .

Will Bang Abbott achieve his fantasy of a lucrative private photo session with Cherry Pye? Will Cherry sober up in time to lip-synch her way through her concert tour? Will Skink track down Ann DeLusia before Cherry's motley posse does? All will be revealed in this hilarious spin on life in the celebrity fast lane.


Review: Carl Hiaasen is at his gleefully twisted, cheerfully maniacal best in Star Island, which was released in paperback earlier this year. He has once again unleashed his clear-eyed vision of people and their foibles, this time in the fertile fields of no-discernible-talent celebrities and the parasites surrounding them.

Cherry Pye is a character everyone will recognize - she could be any number of hard-partying girls in Hollywood who seem to be famous for nothing more than drinking, drugging, rehab, and perfume endorsements.

Chock-full of real name dropping, Star Island is an unsentimental unveiling of the story behind the glossy magazine covers. And this is one of the reasons I love Carl Hiaasen's writing so much - he spares very little sentimentality for people, showing them as they really are, warts and all. This is not ncessarily unsympathetic - for instance, we learn that Cherry Pye was turned into a sexy little prepubescent by her own mother, and then signed to Jailbait records by a music producer who really likes his young clients. But the flip side is that Cherry really is a self-involved, hard-partying simpleton. Her double, Ann DeLusia, also has beauty but also brains and a sense of right and wrong, yet her upbringing was little better than Cherry's. After Ann is kidnapped by the Cherry-besotted Bang Abbott, Ann is hurt and angered to learn that Cherry's mother has not reported her kidnapping to the police. Word of Ann's existence would be financially disastrous for Cherry's "comeback", and that is more important than Ann's life. Luckily for Ann, she has met and charmed both Skink and Chemo who each have their own methods of dealing with situations such as this. And in Hiaasen's world, situations like this are the norm creating an incredibly entertaining and wild ride full of laugh out loud moments. I would recomment NOT drinking a beverage while reading this book - there are too many funny parts.

Hiaasen's sympathies and sentiment are primarily reserved for the Florida flora and fauna, and his anger for those who exploit and destroy it. But while that message is part of his books, it is conveyed with his unique sense of humor and writing style. Phrases like "flaccid conscience", "carefree venality", and "cheese-jizzed nachos", and the song titles of Cherry's "hits" such as "Daddy, What's My New Momma's Name?" and one of her first songs as a 14 y/o titled "Touch Me Like You Mean It", make his books a treat to read.

As with most of his books, the greedy get punished and the good folks have a happy ending. The ending of Star Island felt a bit forced to me, which is the only negative in an otherwise fantastic book. I didn't understand Ann's need to drag Skink to a night club (name and theme of "Pubes" - ha!) to confront the clueless Cherry, and it felt contrived. But after the wild ride of this hilarious, wacky story it's a small complaint. This book is fun and entertaining - read it!