I was lucky enough to get my hands on a ARC of the anthology book "So i Married a Demon Slayer" by a trio of authors, Kathy Love, Angie fox and Lexi George. I have to admit that i was after the  Lexi George novella. I read her debut novel(Demon Hunting in Dixie) a while back and loved it so much I've been patiently waiting for more. 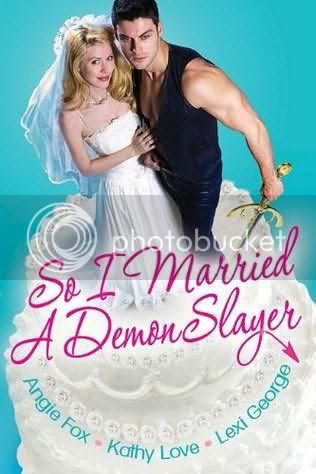 
In the lusty humidity of the Deep South, among the neon lights of Vegas, and the glitz of high-fashion, demon slayers are the new sexy…

“Hot!” by By Kathy Love
At Hot! Magazine, the devil really does wear Prada. When the CEO is an actual demon and the mail room guys are undercover demon slayers, it’s not beyond the realm of possibility for an up-and-coming photographer and a model possessed by much more than a sweet tooth to fall in love.


“What Slays In Vegas” by Angie Fox
When a sexy succubus comes up against a fearless demon slayer intent on killing her boss, a truly wild Vegas night turns into a quickie wedding. But in a city where anything goes, a demon slayer wedding a succubus is strictly forbidden. Which doesn’t mean either is rushing to jump out of the marriage bed.

“The Bride Wore Demon Dust” by Lexi George
He’s perfection in a tuxedo—more so out of it—and on a mission to protect his Alabama gal from the mysterious mayhem intent on her destruction. But the bride is a spunky steel magnolia with special powers of her own, determined to drop-kick evil forces across the state line and give her slayer a run for his money


Starting with Kathy Love her 98 page novella is called "HOT".  Hot is the name of a fashion magazine where Charlie wants to work as a staff photographer. He gets in working as a mail room employee but something isn't right. People in the mail room act as if the world depended on them getting the mail delivered and people on the 15 floor look off to him. He keeps seeing things and thinking it must be the lighting. He meets super model Ava Wells and clicks with her but there is sadness in her eyes and he feels something is going on with her. Turns out he is a demon slayer. Go figure. This one was just eh? There wasn't much to the story really and it felt kind of ho hum for me. I don't think i've read Kathy Love before so I'm not going to say i wouldn't read her again because this doesn't seem like a fair representation of her work.

Next up is Angie Fox and her novella "What Slays in Vegas". There is a note in the book that says that this story takes place 1 year after the events in "The Dangerous Book of Demon Slayers."  Before i read this i went to her website to see if this was part of a series or just a novella on it's own. It's part of a series and browsing the website i got the gist of the series it goes with. I hope to read a few of the other books in this series in the future based on what i saw there.  This novella is 82 pages and there is quite a lot of story packed into it. Shiloh is a half demon half human succubus working for a demon literally from hell in Las Vegas. She's been used by many in the thousands of years she's been around. Then one day she gets assigned to Damien in the Lust room. He thinks he's getting a full succubus and when he drugs her with a truth serum to find out secrets about her boss the master demon he gets nothing. He does wake up married the next morning with Shiloh in his hotel bed. Neither remembers what happened. Damien decides to use Shiloh to get what he wants. Thing is what he is starting to want for keeps is her. I really liked this one and hope to read the other books that go with this one. This one had some funny stuff and some sweet stuff going for it. Definitely worth reading.

Last we have Lexi George. Her novella is a whopping 132 pages or so of the most hilarious stuff ever. The novella is called The Bride Wore Demon Dust. The first sentence of the story goes like this. "Bunny's wedding was perfect, beautiful, tasteful and refined--until her husband tried to kill the photographer." At first i thought BUNNY? seriously? Then i remembered Lexi's last book Demon Hunting in Dixie and how funny it was. Ah yes this is going to a funny paranormal. A few sentences later and i was laughing my ass off literally. Rafe and Brand his brother from Demon Hunting in Dixie are demon slayers. He's come to see why big brother Brand went gaga over a women. The Dalvahni are warrior demon slayers. They don't fall in love.  Bunny is the town librarian and Rafe meets her when he saves her from what she thinks was a mugger. It wasn't of course it was a demon. In order to save her though Rafe had to give her some of his essence so now she is like him. He marries her in  order to protect her but doesn't explain exactly what he is and what she now is until the they are attacked by the photographer at the wedding who has been taken over by a demon. What follows is some of the funniest stuff I've read in a while. I was in tears laughing so hard. Had to read out loud some of the dialogue to my adult son who was here at the time and he was laughing too. I like my humour in any book but i usually don't get this much. Bunny can't believe what she's just been told and takes off, literally. She jumps in the pink Mary Kay wedding car all decorated up for the wedding and takes off in her wedding dress for the house on the coast where she and Rafe were supposed to have their honeymoon. In the meantime Rafe goes after her. Does he ever figure out that yes Dalvahni do love? You bet! He also gets the surprise of his life before the end. Bunny is hiding a pretty big secret herself.

Here are some links for you to check out these authors and see what other books they have in the works.
www.angiefox.wordpress.com
www.readkathylove.com
www.lexigeorge.com

I give So I Married a Demon Slayer 4 out of 5 Modokker Book Pick Stars. The Lexi George book was the best of the 3 by far for me but i enjoyed them all. I can recommend Lexi George's debut book Demon Hunting in Dixie if you like humorous paranormal romance. It comes before this novella but each can be read alone.