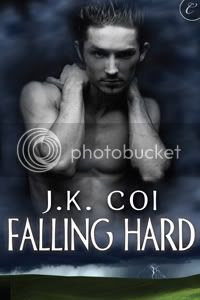 Back of the Book Blurb: After a life filled with tragedy, rocker Gabriel Gunn thinks he's finally getting the better of his personal demons. Then he's attacked after a concert—and rescued by a warrior goddess brandishing a sword and white wings. As hard as it is to believe in an angelic bodyguard, Gabriel must face an even more impossible truth: he carries the devil's soul within him.

Amelia has been watching over Gabriel for years, using her angelic powers to prevent Lucifer's return. Now she must also protect him from warring angel factions with their own agendas. Amelia would do anything to avert another angelic war, even sacrifice her own emotions to avoid temptation. Yet with Gabriel she feels things she no longer wants to deny, and pleasure she never imagined.

But the closer Gabriel and Amelia get, the stronger Lucifer becomes. Will Amelia be forced to kill the man she's come to love to stop the war she's always feared?

The first 70 or so pages were quite promising, as we are introduced to Gabriel Gunn, rock god and recovering drug addict. For the last year or so he has been trying to live a better life, and his best friend and manager David has been by his side on a concert tour. But Gabriel's life is about to change, as a rogue angel attacks one night, killing David and injuring Gabriel. The only reason Gabriel survives is the arrival of the mysterious Amelia, his personal guardian angel and a warrior known as the Avenger. Turns out most people don't have a guardian angel, but then again most people don't have Lucifer's soul hanging out inside them. And Gabriel does, which is one of the reasons for his dark past and his hypnotic singing voice. But it also puts Gabriel in the middle of an ancient war between angels, as the rogue faction wants to release Lucifer's soul, in order to defeat the Archangels. Amelia's job (she is the Archangel's Avenger) is to prevent this from happening, even if it means killing Gabriel.


However, Amelia has spent so long on the mortal plain she has regained her emotions as her strength wanes. And her emotions are love and lust for Gabriel, making her question her orders, as well as her loyalty to the Archangels who originally stripped all emotions from angels and bound them to the angelic realm.


At this point I became frustrated with the story, as it took a good 100 pages for the plot to advance and action to occur. But the narrative also began to inform the reader of emotions and reactions, rather than the characters speaking or acting in a way that conveys emotion. The growing attraction and affection between Gabriel and Amelia is described as electric and hot, but as a reader I never felt it. I actually skimmed over the sex scenes, which I never do, but reading it felt like passion being dictated, rather than felt. An example of the forced narrative is the sudden change described for characters in order to advance the plot. For pages and pages Gabriel is lusting after Amelia and fretting over his desire to "defile an angel", but she is worried that he is not seeing the real Amelia. Cue one paragraph forward, and now the narrative is describing how Gabriel is suddenly, awkwardly thinking about how he likes Amelia for who she is, not just her body.


The rest of the story involves the battle of Gabriel for his soul against that of Lucifer's, the relationship between Amelia and Gabriel, and a battle between the warring angel factions. Towards the end Amelia is apparently mortally wounded, and Gabriel spends a significant amount of time posturing and threatening another angel before trying to help her. While the ending is a happy one, it also leaves an opening for the next book. Because I found the character development forced and awkward, and the plot pace too slow, I can not recommend this book. But if you love angel romances, this book may be for you.

1 out of 5 Modokker Book Pick Stars