If you recall this was a Friday free ebook pick a couple weeks ago. It is still free on Amazon as of 8/22

It was self-published by the author in July 2010. 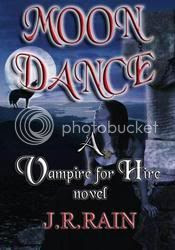 Six years ago federal agent Samantha Moon was the perfect wife and mother, your typical soccer mom with the minivan and suburban home. Then the unthinkable happens, an attack that changes her life forever. And forever is a very long time for a vampire.

Now the world at large thinks Samantha has developed a rare skin disease, a disease which forces her to quit her day job and stay out of the light of the sun. Now working the night shift as a private investigator, Samantha is hired by Kingsley Fulcrum to investigate the murder attempt on his life, a horrific scene captured on TV and seen around the country. But as the case unfolds, Samantha discovers Kingsley isn't exactly what he appears to be; after all, there is a reason why he survived five shots to the head.

Review: Does anyone else get that weirdly happy, tingly feeling when you're a few chapters into a book by an author new to you, and you realize "Damn, this is REALLY GOOD!" and he's got MORE!! Well, that's what happened to me yesterday, as I was reading Moon Dance by J.R. Rain. I was enjoying it so much I didn't want to leave the story. It doesn't get much better for us bookworms. Contented sigh here..................ok, on to the review.

Samantha Moon is six years into life as a vampire. Although she has learned to cope, her life has drastically changed. She had to quit her job as a federal agent and start a home-based (with night hours) business as a private investigator. Her husband, who was initially supportive, is increasingly distant and cold, and caring for her kids in the afternoons is a constant struggle for a creature of the night. The stress of juggling these demands, while coping with her vampirism, is taking its toll on Samantha. But she deals with it by working out like a fiend, boxing and running until she's exhausted. Or as close to exhausted as a super strong, super fast vampire can get.

Samantha is a great, realistic character. She's a loving mother trying to raise her kids, run a business and keep her marriage together. Her husband is absent much of the time, and she's pretty sure he's having an affair. But she's not ready to confront him, and is terrified of losing her children and her marriage. She also has the added stress of dealing with her abilities and limitations. Her enhanced strength and reflexes are great, but dragging herself out of bed to be with the kids after school is painful and difficult. Not to mention her existential worries: is she dead? evil? how long will she live? These things made Samantha sympathetic and relatable. Her frustration and anger are understandable.

A couple points here - I really liked how the author dealt with the practical issues of a mom and wife who becomes a vampire. The incident caused her to live a life of secrets, to protect herself and her family. She lives in fear of discovery. Her husband, initially seen as a cold and adulterous jackass, really helped her after her attack, researching diseases to explain her aversion to sunlight and her pale skin. He set up an account at a butcher shop to procure animal blood, and supported her career change. But six years of living with a vampire have taken their toll on the relationship - love and support have turned to fear and loathing. These characters are so multi-dimensional, and as such much more believable.

Enter Kingsley Fulcrum, new client and really sexy man. His case is a challenge to Samantha, as she works with the police detective (another sexy man! she may be undead, but she's not DEAD), to figure out who tried to kill him. And on a personal level, she's rather suspicious about Kingsley's freakish survival. She also receives support and advice from an online friend who accepts her claims to be a vampire.

The new men in Samantha's life help her to put a positive spin on things, and look at her life with a new perspective. She is learning to embrace her changes, and believe in herself, just as her old life is crumbling. Soon she is trying to survive a vampire hunter, and another killer, juggle her feelings of lust for Kingsley with her loyalty to her philandering husband, and take care of her children.

A plot and pace that moves along nicely, a well-done mystery, interesting secondary characters, and at the end the stage is set for the further adventures of Samantha Moon - I loved this book! Barnes and Noble is offering an e-book boxed set of these books for $9.99 and I plan on getting them - stay tuned for future reviews!

5 out of 5 Modokker Book Pick Stars

A HUGE thank you to my friend Lisa who recommended this book as her most recent Free Ebook Fridays here on this blog - I owe you one, Lisa!