Book review: Lord of the Vampires by author Gena Showalter 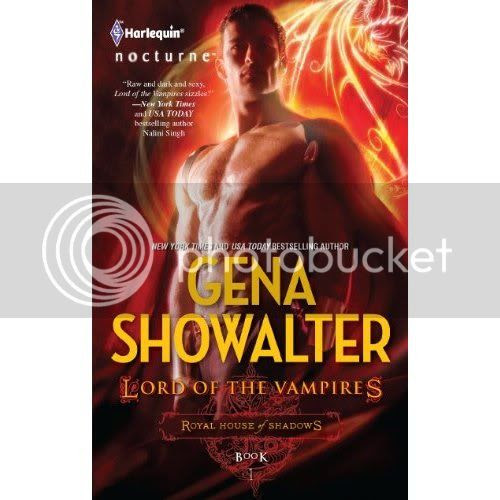 
Once upon a time…the Blood Sorcerer vanquished the kingdom of Elden. To save their children, the queen scattered them to safety and the king filled them with vengeance.

Only a magical timepiece connects the four royal heirs…and time is running out.…

Nicolai the Vampire was renowned for his virility, but in a twist of fate "The Dark Seducer" had become a sex slave in the kingdom of Delfina—stripped of his precious timepiece and his memory. All that remained was a primal need for freedom, revenge—and the only woman who could help him.

In her dreams, a wanton vampire called to Jane Parker, drawing her to his dark sexuality and his magical realm.

But for a human, all was not a fairy tale in Delfina. Jane was the key to Nicolai's memory…but exploiting her meant dooming the only mortal he craved.

Fans of Gena Showalter are sure to devour her latest novel, a steamy modern fairy tale. Jane Parker is a scientific genius who has spent the last year recovering from a horrific car crash that killed her entire family and left her unable to walk for months. When she is finally released from the hospital, she returns to her small home in Oklahoma to live a life of boring and monotonous routine. But one day a magical book is left on her doorstep, and after reading it she is transported to another world, where she meets Nicolai, a vampire and a sex slave. He has magically called her to him to help him escape, and has glamoured her to appear to be the sadistic witch princess he killed. Nicolai's original intentions are to escape at any cost, leaving Jane behind. But he does not anticipate being intrigued by Jane's intelligence and bravery, and attracted to her at a primal level. When the Queen of Hearts has Jane whipped for defying her, his plan to escape alone disappears, as his need to protect and rescue Jane overrides every other emotion. When Nicolai goes animal/alpha, he goes ALL the way. He is soon ripping out throats, removing limbs, grunting in one word sentences, and protecting the hell out of Jane. Hubba hubba!

Jane is a great heroine. She is incredibly smart, but also brave, strong, and willing to fight. Her year of loss, surgeries and pain has molded her into a woman capable of handling almost anything, and she is not going to let a hot, animalistic, incredibly experienced vampire get away from her.

The action keeps the plot moving along at a rapid pace and the characters are both likeable. The story was greatly improved with the well-developed main characters, as well as their detailed histories. Nicolai is slowly starting to recover his memories, and realizing he has siblings to find and murdered parents to avenge. Jane is struggling with the guilt that she spent her career studying magical creatures that somehow came into the human world.

As with other books by Gena Showalter, there is genuine humor in this story, and I laughed out loud several times. The ending is very satisfying. I can't wait to read the next story in this series!
4 out of 5 Modokker Book Picks