Ooooh, this is a fabulous, spooky young adult novel - it was sooooo good!

Published in 2009 by Scholastic
Young Adult/Mystery/Supernatural/English 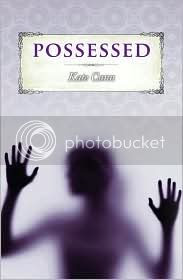 Back of the Book Blurb: Escape....or trap? When she finds a job at a secluded country estate, Rayne jumps at the chance to escape from her controlling boyfriend and her mother's tiny apartment in London. A quiet summer is just what she needs. But Rayne's retreat feels like another prison. The ancient estate is filled with spooky relics and a strange, stifling energy. Rayne wants to believe it's all her imagination, but the longer she stays, the more she can feel something evil at work...something that wants to keep her there...forever.

Review: Possessed is an exceptionally spooky novel that weaves a chilling web of encroaching menace around the reader. The story's heroine is sixteen year old Rayne. She feels trapped and smothered in London, where she takes care of her little brother for her irresponsible mother, and by her boyfriend who wants more than she is ready to give. She also craves silence and space, so she applies for a waitress job at an ancient estate in the countryside near the Wales border.

When she arrives, Rayne is almost overwhelmed by the natural beauty, the silence of the country, and by the strange and unsettling energy swirling around the thousand year old building. The kindly housekeeper, Mrs. Driver, gets Rayne settled into her room, and after her first terrifying night in the strange place, Rayne is ready to head for home. But after her first day of waitressing, followed by a quiet and peaceful walk through the grounds and woods, Rayne experiences feelings she has never had before. She feels free, content, and strangely at home in the natural setting, and feels like she can finally be herself.

All is not as peaceful as it seems, however, and Rayne begins to feel as though something more is going on. Mrs. Driver insists that Rayne always lock her door at night, and mentions that so few people can "sense" the house energy. The few locals Rayne meets are shocked she is willing to stay at the Manor, but nobody will tell her anything specific.

The author is a master at slowly building a feeling of dread, as though an invisible trap is being slowly sprung around Rayne. The prose is so evocative I felt as if I was walking with Rayne through the woods, feeling the sunshine on my skin, and sensing the evil presence of something unseen in the ancient manor. The imagery is very effective at enhancing the theme of a trap and freedom being a matter of perspective. From the geese living on the tiny island in the lake, isolated but safe from the fox, to the magnificent palm tree that has shattered the greenhouse roof that sheltered it and allowed it to grow, and is now reaching for the sky. A major secondary theme is that appearances can be deceiving and all is definitely not what it seems. A pair of beautiful leather gloves embroidered with flowers, except on closer inspection those flowers are actually tortured faces in agony. A handsome local boy who is infatuated with Rayne but who has a seemingly hypnotic hold on those around him. A local fire festival group that may or may not be devil worshippers. And a mother and boyfriend who didn't seem to care about Rayne, yet they call and text constantly, frantic with worry at her silence.

As Rayne struggles to learn who she can trust, and tries to discover the secrets held by the locals, she is also gaining a sense of self. Her journey is full of confusion, fear, exhilaration, and a little of the supernatural.

Possessed is a rare treat, and well worth your time. Very few books capture a feeling so completely, transporting the reader to a different place and a different mood so thoroughly. I will be reading the sequel, Consumed and reviewing that as well.


5 out of 5 Modokker Book Pick Stars

For more information, visit the author's website at www.katecann.com