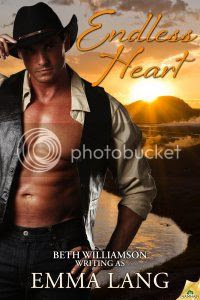 She’s learning to live. He’s forgotten how. Love will be their teacher.

Lettie Brown has lived in the shadow of violence. After escaping her brutal past, she’s finally at home in Forestville, Wyoming, where she would live a normal life—if she knew how. She’s content working at The Blue Plate and printing the town newspaper, if not happy. Then a stranger stumbles into her world and turns everything upside down.

Shane Murphy is a shell of a man, destroyed by the aftermath of the war, his personal tragedies and a penchant for cheap whiskey. When he lands, literally, on Lettie’s feet, his future takes a hard right turn.

As they fumble through a relationship that should not have been, a deep love takes root, one that cannot be denied. Together they discover a bond as unbreakable as steel and as undeniable as life itself—until the past rears its ugly head and threatens the happiness they’ve found in each other.

Endless Heart is book 3 in Emma Lang's Heart series. I love a good western/cowboy romance. Lettie Brown seems have had a very rough life until she escapes to Wyoming with her friend Angeline. She's working at the Blue Plate restaurant trying to mind her own business and just get by with a minimal amount of contentment. It all comes crashing down on her when Shane Murphy falls on her feet. Literally on her feet. Shane's been on a 3 week drunk and was beat up and left for dead i guess. Somehow he ends up at the door of the Blue Plate and on Lettie's feet where he throws up all over her shoes.  The owners of the Blue Plate who took Lettie and her friend Angeline in take Shane in too. They doctor him up and try to help him recover. He has nothing. No money not even clothes since they had to burns his. Lettie is attracted to Shane though and it scares her to death. Shane likes her too and due to old emotional wounds neither think it's a good idea to be together. To bad they can't help it. When they are tasked to make a run for supplies for the Blue Plate things go bad for them quickly and they forced to rely on each other to survive. They decide they can't fight their feelings while trying to out run some bad guys. I really enjoyed this book. You can read it alone but I felt like i was a bit in the dark in a few area and if i had the could have i would've read the first two in this series before attempting this one. If you can over look that you can read it alone. Both Lettie and Shane have tortured souls. It's kind of heartbreaking to find out about what they went through. There is a little of what i call mystical magic in this book too in the form of a spirit that's really fun. A really nice enjoyable read. I want to get the backlist now. 4 out of 5 Modokker Book Pick Stars.

Find out more about Emma Lang ( Also knows as Beth Williamson) on her website here. www.bethwilliamson.com

Read a excerpt for this book and find out about her other books too.