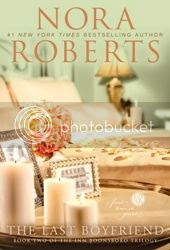 "Owen is the organizer of the Montgomery clan, running the family’s construction business with an iron fist—and an even less flexible spreadsheet. And though his brothers bust on his compulsive list-making, the Inn BoonsBoro is about to open right on schedule. The only thing Owen didn’t plan for was Avery McTavish...

Avery’s popular pizza place is right across the street from the inn, giving her a first-hand look at its amazing renovation—and a newfound appreciation for Owen. Since he was her first boyfriend when they were kids, Owen has never been far from Avery’s thoughts. But the attraction she’s feeling for him now is far from innocent.

As Avery and Owen cautiously take their relationship to another level, the opening of the inn gives the whole town of Boonsboro a reason to celebrate. But Owen’s hard work has only begun. Getting Avery to let down her guard is going to take longer than he expected—and so will getting her to realize that her first boyfriend is going to be her last…" - Penguin Group


This is the 2nd book in a new trilogy by Nora Roberts. The Inn Boonsboro series has been partly about the reconstruction of a old Inn in the town of Boonsboro. It has served at a backdrop to the series with a mystery inside it's walls. There is a ghost inside the Inn that makes herself known to the oldest brother Beckett and Clare's little boy Murphy in the first book. In the second book she makes herself known to Owen and Hope although Avery also tries talking with her. You get a bit more of the puzzle of the ghost Lizzie in book 2. By book three we should find all the answers to that mystery but so far it's been very interesting. This also happens to be Owen and Avery's book. Owen was Avery's very first boyfriend when she was only 5 years old and Owen was 8. All these years there two family's have been close and the Montgomery boys have always watched out for Avery especially Owen. Right from the beginning they love each other but they now have to decide if they should take that love to the next level. Owen likes things in order and makes lists for everything and is very organized while Avery is a bit more fly by the seat of her pants. Therefore the her issues with her mother abandoning her as a child cause some problems with their relationship they have to get through. Owen is patient and loving and supportive along either Avery's friends and help her get through it. This is not a fiery romance but i enjoyed it all the same. Sometimes a relaxed but intense love is just the ticket. You get quite a bit of fire between Hope and Ryder anyway. I love how you get peaks into Hope and Ryder's interactions and where that might lead to in book 3. You also get Beckett and Clare's house building and wedding and a surprise with them as well. The whole book is a family affair with the Mongomery's mom and their aunt too. It was a fun book that i really enjoyed and felt was very romantic. Interested in how Nora Roberts will ties up the series in the next and last book and what's going to happen with the ghost. 4 out of 5 Modokker Book Pick stars for Nora Roberts "The Last Boyfriend".

Find out more about the book on Nora Roberts website here www.noraroberts.com