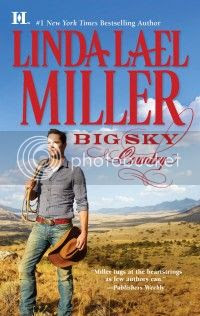 The illegitimate son of a wealthy rancher, Sheriff Slade Barlow grew up in a trailer hitched to the Curly-Burly hair salon his mother runs. He was never acknowledged by his father…until now. Suddenly, Slade has inherited half of Whisper Creek Ranch, one of the most prosperous in Parable, Montana. That doesn't sit well with his half brother, Hutch, who grew up with all the rights of a Carmody—including the affections of Joslyn Kirk, homecoming queen, rodeo queen, beauty queen, whom Slade has never forgotten.


But Joslyn is barely holding her head up these days as she works to pay back everyone her crooked stepfather cheated. With a town to protect, plus a rebellious teenage stepdaughter, Slade has his hands full. But someone has to convince Joslyn that she's responsible only for her own actions—such as her effect on this lawman's guarded heart.

Seems like it's been a while since a new Linda Lael Miller came out. This is book 1 of her new series. I am a sucker for cowboys and Linda Lael Miller writes some darn good cowboy romances. Back in high school Slade Barlow was the poor boy, the outsider and unclaimed child of a very rich man (John Carmody).Slade and his mom had to struggle to survive. Joslyn on the other had was a rich kid who had everything. Big house fancy car when she turned 16 popular and dating Slade half brother Hutch. Slade always had a thing for Joslyn but at the time she only had eyes for Hutch. Years later Slade is now the sheriff and his father has passed away but finally claims him in his will  leaving him half of his huge ranch to him and half to Hutch. The two brothers have never gotten along and now it's either figure out a truce or things get even more difficult. Joslyn is back too. She left town years ago when it was discovered her step dad was running a scam and bilked friends and family out of a lot of money. He's died in prison now but Joslyn has felt guilt over the whole thing for years even though she was a kid and it wasn't her fault. She has worked for years for a way to repay all his victims. Finally feeling like she's done that. People have been getting checks and they don't realize it's actually come from her. To that end she's pretty much broke. She comes home for closure and to be with her friend Kendra who is having a hard time personally right now.  You've got the thing going on between Joslyn and Slade, Hutch and Slade banging on each other over the ranch and the mystery with Kendra and the man she was married to and the attraction between her and Hutch.  Throw in Slade's 16 year old ex step daughter who comes to stay with him and there is a lot going on. You only gets bits and pieces of some things that will be eventually  addressed I'm sure in the next couple of books. It's a fun book but not in my opinion as good and some of Linda Lael Miller's other books. I just didn't feel as excited as i have reading some of her previous books. I'm hoping book two will come out stronger and i can get that feeling back. 3 out of 5 Modokker Book Pick stars for Big Sky Country by Linda Lael Miller.

Find out more about this book and Linda Lael Miller's other work here.www.lindalaelmiller.com
Posted by Modokker at 5/17/2012 01:00:00 AM