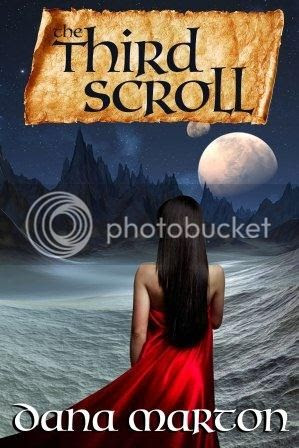 Sold into slavery, Tera, a budding healer, is thrust into the savage realm of barbarian warlords, the same realm which claimed her mother years ago. She must avoid the displeasure of her warrior lord and survive the cruelties of the concubines, even as war threatens on the horizon.


Yet a greater danger looms when she catches the eye of the most powerful lord of the land and he takes her for his Pleasure Hall. Tera struggles to escape, while searching for the secret behind her mother’s death. But what she discovers challenges everything she believes in. A path set long ago beckons. A path that could lead to triumph, or the destruction of her world.

I have read many Dana Marton romantic suspense books. When i was offered the chance to read her new fantasy novel, The Third Scroll I didn't know what to expect. First i don't usually read any fantasy. Wasn't sure i could get into it no matter if it was well written or not because i didn't think it could be my thing. I admit i did have a hard time getting through the first 20% of it. Mostly because the first book in a series has to have some back story and more detailed info on the setting and I also was struggling thinking i wouldn't like it. When i finally got a nice block of time to sit and read with out work, kids etc going at me I found myself entranced. The more i read the more i liked. I read the last 80% (book is 450 pages) in one sitting. The writing is just beautiful. It flows sometimes like water. I don't know how else to describe it other than to say i enjoyed how it felt reading it. Does that make sense? lol  I was really afraid there would be any romance at all and was happy when it finally showed up. It takes a while to get to that though. Well worth the wait. Tera struggles to live up to her mother's legacy. She's a healer but without the true healing abilities her mother had. She's sold by her step father into slavery and for a good portion of the book is treated horribly until she is gifted to the warlord Batumar. Tera is pretty much a innocent at the beginning of this book. Struggling with her healing abilities or rather lack of true abilities and then her world is turned completely upside down when her stepfather sells her into slavery. She then has to deal with many  hardships from living in a totally different climate, to being a slave to being beaten and the list goes on. By the time Batumar gets her she is pretty well ingrained to not expect anything good. It takes a while for her toget used to  Batumar and his thoughts on her aren't immediately shown. Your left wondering what his intentions are. Dana Marton definitely can write romantic suspense and it's safe to say she can add fantasy to her writing abilities. I was thoroughly involved in the book. Wonderful thought out characters and a awesome plot. I can't wait for more. 5 out  of 5 Modokker Book Pick Stars.

Find out more about this book, read a excerpt and see what else Dana has to offer on her websitewww.danamarton.com