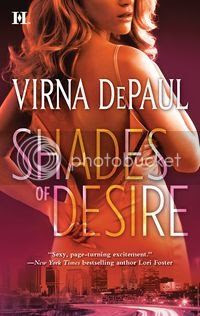 
Natalie Jones is the lucky survivor of an elusive killer who preys on young women and then disappears from view. And since her harrowing ordeal, the once gutsy photojournalist has remained isolated in her home, paralyzed by fear and her failing vision.

Special Agent Liam “Mac” McKenzie has scars of his own. But despite his efforts to ignore the attraction that simmers between him and Natalie, he needs her help to catch a predator. Soon, they will forge a tentative alliance—charged with desire. Through a soft-focus lens, Natalie dares to envision a future with Mac beyond the investigation...never guessing that the clues hidden within her photographs are drawing them into an explosive confrontation with a madman.

This is the first book I've ever read by Virna DePaul. This is the first book in a series (Special Investigations Groups Series, or SIG) so it's a nice place to start with a new to me author as well. Natalie Jones is a very complicated character with a very difficult past and possibly a very difficult future as well. Abused by her mother as a child and then sent to a foster home when her mother was committed to a hospital diagnosed insane. Her mother had a degenerating eye problem that she blamed on Natalie. Punished her cruelly for it as well. When she was 17 she finds out she has the same thing.She's going blind. In spite of that she becomes this awesome well know photojournalist. Years later it finally starts to happen she starts losing her eyesight. One of the last thing she shoots pictures of is the local Farmers market. Already she can't see very well but still she is enjoying herself when sudden pain in her head takes her to the ground and her eyesight disappears. Although she gets enough of it back later to mainly just see shadows she has to now learn how to live with it. In steps Liam "Mac" McKenzie cop extraordinaire. OK lol He's actually a part of the Special Investigations group or SIG for short. He's had a bout of bad luck in the relationships department. Given up on relationships all together. He figures with the kind of life and career he leads he's not made for it. Then he gets a load of Natalie Jones. He's immediately drawn to her. He's is investigating a murder that leads him to her door when she is attacked by who he thinks is the same killer.

I really enjoyed this book. There is the suspense part of the book with a killer or killers on the loose. Your never really sure who is involved til later in the book. There is the romance part. Mac has a thing for Natalie right from the start. He fights it and fights it but it's no use. She feels it too, but has her own demons. She's trying to figure out how to live like she did before she was blind. She goes back and forth between being tough and doing things she feels she needs to, to feeling as if she is not enough anymore. I leads her to do some stupid things. The heroine being blind i thought was a interesting idea and different for me. I was curious to see how the author would portray that and make it work especially with the suspense pieces of the story. She really works it out nicely though. Natalie is a strong character and so she is determined to live her life to the fullest. She sure takes a beating in this story but it doesn't keep her down. The action starts out fast and quick but there were a few times it felt off. I think that's where you have to remember this is a contemporary romantic suspense. A mixture of the two separate genre's. In that case i think the author hits it about right. 4out of 5 Modokker Book Pick Stars for Shades of Desire by Virna DePaul.