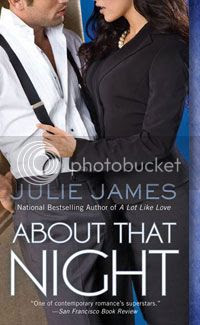 
Though Rylann Pierce tried to fight the sparks she felt for billionaire heir Kyle Rhodes the night they met, their sizzling chemistry was undeniable. But after being stood up on their first date, Rylann never expected to see him again. So when she finds herself face-to-face with Kyle in a courthouse nine years later, she’s stunned. More troubling to the beautiful assistant U.S. attorney is that she’s still wildly attracted to him.

But she’s making the rules.

Just released from prison, Kyle Rhodes isn’t thrilled to be the star witness in a high-profile criminal case—but when Rylann comes knocking at his door, he finds she may be the one lawyer he can’t say no to. Still as gorgeous and sharp-tongued as ever, she lays down the law: she doesn’t mix business with pleasure. But Kyle won’t give up on something he wants—and what he wants is the one woman he’s never forgotten. . .

This is the third book in Julie James FBI/US Attorney series. I've been following this series and so i have and read and reviewed the first two as well. You can read this as a stand alone or in series order. You won't be totally lost if you pick it up to read on it's own. We meet Kyle Rhodes in the previous book in the series A Lot Like Love. In that book Kyle's sister is the main female character. Kyle makes a huge colossal mistake in that book as he is a huge tech wizard and upset and in a drunken state goes in and hacks twitter and shuts it down. Then he jumps a plane out of the country to get away. Finally when he sobers up he goes to fly home and is arrested. Prosecuted and sent to prison with a 18 month sentence. His sister helps get him out after only 4 months. In this book he goes before the judge to get his final motion is his case so he could be a free man. When he steps into the courtroom he finds himself face to face with Rylann Pierce. Kyle met Rylann 9 years ago when she was a law student. Now she's a assistant US attorney and he is her first case in her new office. He was supposed to take her out on a date the day after they met but his mother was killed in a terrible car accident and life got in the way. They had this big connection that apparently 9 years apart didn't dampen.  Rylann finds herself needing his help with a case and in the midst of that they start seeing each other. Kyle is a new man and has a plan for his life. He's building a new company of his own and trying to get past his past mistakes. He'll always be the twitter terrorist though and Rylann is afraid of damaging her reputation by taking their relationship public. This was a really fun read. Loved Kyle and Rylann. The secondary characters were nice and I'm curious to see who the next book is going to be about. I don't feel this book had as much sizzle as the previous two but it's got plenty of great dialogue and funny bits. I look forward to what comes next. 3 out of 5 Modokker Book pick stars for About that Night by Julie James.

Find out more about Julie James this series,  and her other work on her website here www.juliejames.com
Posted by Modokker at 5/16/2012 06:06:00 AM