Bookreview: Wreck of the Nebula Dream by Veronica Scott 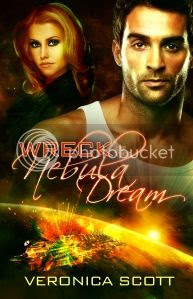 
Traveling unexpectedly aboard the luxury liner Nebula Dream on its maiden voyage across the galaxy, Sectors Special Forces Captain Nick Jameson is ready for ten relaxing days, and hoping to forget his last disastrous mission behind enemy lines. He figures he’ll gamble at the casino, take in the shows, maybe even have a shipboard fling with Mara Lyrae, the beautiful but reserved businesswoman he meets.

All his plans vaporize when the ship suffers a wreck of Titanic proportions. Captain and crew abandon ship, leaving the 8000 passengers stranded without enough lifeboats and drifting unarmed in enemy territory. Aided by Mara, Nick must find a way off the doomed ship for himself and several other innocent people before deadly enemy forces reach them or the ship’s malfunctioning engines finish ticking down to self destruction.

But can Nick conquer the demons from his past that tell him he’ll fail these innocent people just as he failed to save his Special Forces team? Will he outpace his own doubts to win this vital race against time?

This book was a couple of firsts for me. My first Veronica Scott book and my first sci fi romance. The Wreck of the Nebula Dream is reminiscent of the Titanic in a lot of ways only upgrades to a different more advanced world but both ships had similar problems. The Nebula Dream is a premier air ship of it's time. It has all the bells and whistle and more. Almost anything you can imagine. Sectors Special Forces soldier, Captain Nick Jameson could care less. He's pretty sure he just completed his last ever mission considering how badly he thinks it turned out. Very quickly he's added to the Nebula Dream luxury liner hoping to get to relax a little before facing his superiors and finding out his fate. He meets a beautiful business woman way out of his league but that doesn't stop him from thinking about  her even if he's all wrong for her. After passing a few days on the ship and getting a tour of the massive vessel he sees everything is not quite up to snuff. Never did he think he would be facing a disaster on the luxury ship though. Suddenly that's just what happens. The Nebula Dream crashes into a asteroid field. Nick discovers there are no crew directing people on how to escape and once he hooks up with Mara the beautiful business woman and Khevan a D'dvannae brother (kind of a high priced exotic bodyguard per book description). It's seems as it's left to Nick to find out what's going on and see if he can do anything about it if they were going to survive. There's more going on than a asteroid field though. Nick has to work fast to find out who the enemies are and how to outsmart them.  I started reading this book not knowing what to expect. I've never read any sci fi type romance before and wasn't sure if i would like it or not. I like some of the reference to Titanic but more so how that was twisted and made more with imagination and effects. I liked the relationship between all the characters I especially liked Nick Jameson. Even the names says sexy to me. lol I wouldn't mind trying this genre out again. 4 out of 5 Modokker Book Pick stars for Wreck of the Nebula Dream by author Veronica Scott.

Find out more about this book and author Veronica Scott on her website here www.VeronicaScott.com . Buy this in ebook form for 99 cents right now. Buy links on Veronica's website.