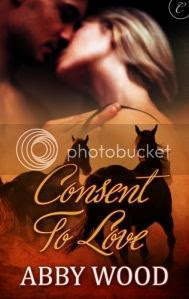 Twenty-four-year-old small-town girl Ana Reynold serves beer at the local bar, tries to keep her beater car running, and dreams of a better life as a painter. If she can learn to make a decent steak, she might get promoted to cook—and earn enough for her real heart’s desire. Right now, that doesn’t include romance.


But when she meets a tall, dark and sexy Native American man named Kane, Ana can’t take her eyes off him—or stop thinking about him. But she’d better. Everyone knows the proud Lakota who raises horses wants nothing to do with a townie barmaid who’ll bring shame to his people.

Except Kane can’t get Ana off his mind. He proposes a red-hot weekend in bed, a no-strings affair to end Monday morning. Yet once Kane brings the outsider onto Lakota land, everything changes…

This is a short 219 page book. The man is hot the sex is hotter. You meet Ana in Consent to the Cowboy the first book in this series. Ana hasn't a lot of options. She just getting by basically. Working as a Waitress in a bar and taking cooking lessons from a friend so she can get away from all the grabby men and work in the back cooking at the bar. On the side she paints and sketches for personal enjoyment. She has no lofty ideas of marrying a rich man like her friend Daphne (from Consent to the Cowboy). Then she meets Kane. a local Native American and brother to Sarah the friend whose teaching her to cook. Kane lives on the reservation. Makes his living training horses and making saddles etc. that a man comes to get and sell for him. He's been burned by love before. At this point he's dedicated to staying on the reservation.  The two have a weekend tryst and that's supposed to be it but when it's over there's more feelings there than anticipated. What follows is a bit of a back and forth for both characters. Unsure of themselves at times they push each other away. Kane doesn't want Ana to have to deal with people who will give her a hard time about him being Native American. Ana is simplistic though and doesn't care what others think. She just wants to be with him. They finally figure it all out. This was a fun read but it was hard to follow a time line. It kind of jumps here and there and your not really given the actual passage of time. Didn't really bother me a lot though. It's a fun and short sexy read. Nice break from heavier reading. 3 out of 5 Modokker Book Picks.

Find out more about Abby Wood and her books on her website here www.authorabbywood.com
Posted by Modokker at 4/25/2012 01:00:00 AM