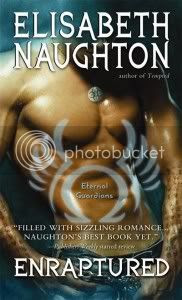 ORPHEUS—To most he’s an enigma, a devil-may-care rogue who does whatever he pleases whenever he wants. Now this loose cannon is part of the Eternal Guardians­—elite warriors assigned to protect the human realm—whether he likes it or not.


Orpheus has just one goal: to rescue his brother from the Underworld. He’s not expecting a woman to get in the way. Especially not a Siren as gorgeous as Skyla. He has no idea she’s an assassin sent by Zeus to seduce, entrap, then ultimately destroy him.


Yet Skyla herself might have the most to lose. There’s a reason Orpheus feels so familiar to her, a reason why her body seems to crave him. Perhaps he’s not the man everyone thinks… The truth could reveal a deadly secret as old as the Eternal Guardians themselves.

This is the first Elisabeth Naughton book for me. I was aware of this series and wanted to read them but never got around to it until Enraptured came up on my radar. I think i saw information about it on twitter and thankfully Netgalley.com had it. I started it hoping that not reading the first 3 books in the series wasn't going to be a bad thing. I was drawn in pretty quickly in the first chapters and decided i was going to like this book a lot. Orpheus is on a mission to save his brother who was sent to the underworld. Gryphon was always the worthy one the good that was a real hero. Orpheus feels tremendous guilt that he is free and his brother is stuck in the underworld being tortured in ways he can't fathom. His mission puts him in contact with a Skyla a Siren who works for Athena and Zeus. Skyla has been a Siren for thousands of years. Essentially she was hiding from herself after something happened to her with the man she loved who she discovers is Orpheus reincarnated. In the beginning she doesn't trust him. In his old life he hurt her terribly and she cannot let herself go there again.  As the story goes on their relationship evolves. It can't be helped the attraction is there no matter how hard they try to deny it. Both keep getting flash backs but only Skyla knows what the flash back or visions are. Orpheus was given a second chance a new soul by the fates to prove himself but he was never supposed to remember the past. When he's with Skyla something about her triggers the visions and he doesn't understand what they mean.  This is a fast paced story it moves a long quickly and there is plenty of action. You get to see many of the Argonauts in action as they come to Orpheus and Skyla's assistance in getting to Gryphon and bringing him home. It's a journey of love and trust and finding something in yourself you didn't think you were capable of. Orpheus comes to care for Skyla deeply and Skyla finds she never quit loving him in the first place. Then there is this realization at the end that could make it all come crashing down. Wow what a ending. I was afraid that Ms. Naughton was going to go in a different direction that what i was hoping for. lol I will say for me anyway that this book would probably have been better had i read the first three books. You can read as a stand alone but some of the secondary stuff will not make as much sense and you have to make assumptions on some things. The story between the two main characters is solid though. 4 out of 5 Modokker Book Pick stars for Enraptured ( love that title) by Elisabeth Naughton. I plan on reading the first three book in this series and following along with whatever book comes next in this series.

Find out more about Elisabeth Naughton, this book and her other works here www.elisabethnaughton.com . There are excerpts there for all four books as well.

Available for purchase now at these retailers •Amazon•Barnes & Noble•B-A-M•Borders•Chapters•IndieBound•Powell’s
Posted by Modokker at 4/04/2012 01:03:00 AM