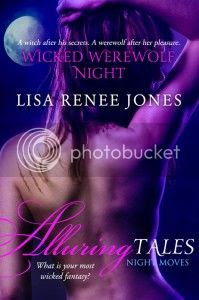 These are the stories of the elite Royal Guard who protects both the wolves of the Society and the innocent humans. For a century now, the natural born werewolves have been in the midst of a civil war. The Rebels would make humans a food group, rather than living with them in peace. The war is a distraction from a bigger problem, THE REDS. The Reds are wolves created by a virus much like the rabies virus. The RED virus turns humans into vicious killers. Now the Society must fight the Reds and the Rebels to protect humanity.


Natural born wolves live hundred of years, again very slowly. They have an uneasy alliance with the Vampire world, as you will learn in the first three books of the Vampire Wardens. It is not necessary to read the Wardens first though I think its a good introduction into this world.

A witch after his secret. A wolf after her pleasure.


Nico Moore is the leader of of The Werewolf Society’s elite Royal Guard. Aylia Richardson is the witch who calls to the beast in Nico, but destiny has also made her the keeper of a gift that threatens the very existence of his race. To destroy this gift will destroy this woman…the only one he has ever dared to call ‘mate’.

Buy it from Amazon for Kindle here www.amazon.com

Find out more about Lisa Renee Jones and this book as well as her other work here www.lisareneejones.com
Posted by Modokker at 4/06/2012 01:00:00 AM