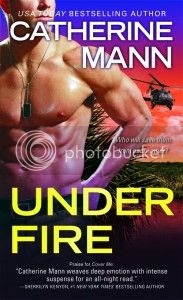 A decorated hero, pararescueman Liam McCabe lives to serve. Six months ago, he and Rachel Flores met in the horrific aftermath of an earthquake in the Bahamas. They were tempted by an explosive attraction, yet parted ways. Still, Liam has thought about Rachel every day—and night—since.

Now, after ignoring all his phone calls for six months, Rachel has turned up on base with a wild story about a high-ranking military traitor. She claims no one but Liam can help her—and she won’t trust anyone else.

With nothing but her word and the testimony of a discharged military cop to go on, Liam would be insane to risk his career—even his life—to help this woman who left him in the dust.

Wow i think this is my first full fledge Catherine Mann book. Talk about exciting. This book takes off with the action right from the beginning. A Pack of hot and sexy in shape pararescue guys swimming  miles and miles and all the while playing a somewhat dirty word game. What a way to open a book. Liam or Major McCabe is thinking about retiring. He's not that old at 38 but for what he does he's getting to be ancient. Rachel Flores met Liam 6 months ago in Bahamas rescuing people after a earthquake. She and her dog were part of team sent there to work with Liam and his team of pararescue men. They had a big attraction for each other but Rachel was afraid of getting hurt so she held off. Back stateside she ignored his calls and him for 6 months until something happened and she needed his help.  Rachel is training therapy dogs because she is burned out on the rescue jobs right now and that's how she meets Lieutenant Brandon Harris a wounded vet with PTSD who has a secret that could get them all killed. He shares part of that secret with Rachel and when she tries to help she finds out that people don't believe them and someone is out to silence them. That's where Liam comes in. She goes to him for help and that quickly launches them in a race to survive and find out who is after them. In the middle of that they try to figure out what's between then which leads to some funny and some really hot sexy moments. I loved Liam and his team and Rachel is pretty kick ass tough. Both Liam and Rachel have to work through some pretty intense issues in the story as where they are with each other and with the threat against them. One thing i didn't care for was how many times it was brought up that he'd been married 3 times. At one point he tells Rachel about each one and why he married etc. It seems to stick out like a sore thumb. Rachel finally gets past that and has some big realizations of her own. This book was intense with some humor and romance thrown in to balance the whole thing out nicely. 4 out of 5 Modokker Book Pick Stars for Under Fire by Catherine Mann. This book is part of a series but can stand on it's own if you have not read the first two. For myself though I am getting and reading book 1 and 2 soon.


Find out more about Catherine Mann this book and her other work here on her website. There's even a excerpt there for this book. www.catherinemann.com