Book review: Somebody to Love by Kristan Higgins 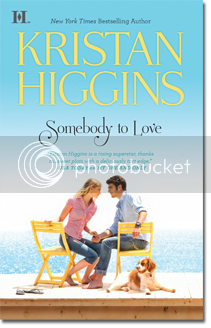 
After her father loses the family fortune in an insider-trading scheme, single mom Parker Welles is faced with some hard decisions. First order of business: go to Gideon’s Cove, Maine, to sell the only thing she now owns—a decrepit house in need of some serious flipping. When her father’s wingman, James Cahill, asks to go with her, she’s not thrilled…even if he is fairly gorgeous and knows his way around a toolbox.

Having to fend for herself for the first time in her life, Parker signs on as a florist’s assistant and starts to find out who she really is. Maybe James isn’t the glib lawyer she always thought he was. And maybe the house isn’t the only thing that needs a little TLC

I've read a small handful of Kristan Higgins books so far. All pretty good but this one i think i like the best. Parker Welles was rich and then she wasn't. In the blink of a eye literally she finds out she must move out of the mansion she's been living in and all her money in her trust fund and that of her young sons is gone. All of it gone. Her dad is going to prison and the feds are taking everything that's not in her name. She finds out she owns a house Maine and she's hoping that she can fix it up some flip and she'll be OK. Turns out the place is a dump. Really the place is loaded down with stuff. Turns the aunt that left it to her might have been a bit of a hoarder. James Cahill is her dads personal lawyer. Where Harry Welles goes he goes. He's the one who has to tell Parker who appears to hate him that everything is gone and she has no place to live.  Both Parker and James had traumatic events happen to them as kids that has damaged their hearts and souls. James decides he needs to help Parker with her house. He's got the skills as a carpenter he learned  from his dad so he shows up and moves into the house with Parker and they start fixing it up to sell.  What follows is a eventually a hot summer romance that maybe could be something more. This was a great book. I laughed and cried dammit. I felt a lot of things and i guess that's the point. All the characters were great. Lots of personalities to deal with and lots of changes for the main characters. This is a book that if i had a solid block of time to read i would read it in one sitting. I just wanted to see what would happen next. There are a few mysteries that are hinted at throughout the book that you can guess about before they are revealed. James and Parker each seems to have a separate journey to take to get to the point of taking another journey together. This was just a really full book with so much story. I would definitely recommend this book to friends and will. 5 out of 5 Modokker Book Pick stars for Somebody to Love. You'll laugh and often and cry too.

Find out more about this book and Kristan Higgins other work here www.kristanhiggins.com. There are a couple secondary characters in this book Ethan and Lucy. If you want to read about them scroll down on the book page and find The Next Best Thing which is their story. You can read a blurb and more for both books on her website.
Posted by Modokker at 4/12/2012 01:00:00 AM