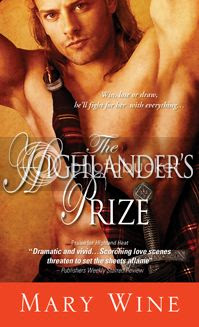 
Sent to Scotland to be the king’s mistress and produce an heir, Clarrisa of York has never needed a miracle more. But the brusque Highland laird who kidnaps her is a bit too rough to be considered divine intervention.

HE’LL DO ANYTHING TO THWART HIS KING

With rival lairds determined to steal Clarrisa from him and royal henchmen searching for her allover the Highlands, Laird Broen MacNicols has a mess on his hands. Worse yet, there’s a magnetic attraction berween them, although he’s betrothed to another. But even an independent–minded lady like Clarrisa knows that a Highlander always claims his prize…

This is my first Mary Wine book. I think i picked up a free ebook from Amazon by her a while ago and that was my intro to her books. I saw The Highlander's Prize on Netgalley.com and the cover spoke to me. I love a great cover and in my opinion this one evokes the sexy strength i think all Highlanders are duty bound to have. lol Clarrisa finds herself in a terrible place. Basically sold to a King who only wants to use her to further his own ambitions. Broen vows to steal her to help himself and his fellow Scots against said King. What Broen didn't anticipate is the effect Clarrisa would have on his heart and soul. This book was good but it felt like it took me a long time to get to the halfway point. I can't really pinpoint a reason why. I will say that once i did reach the halfway point it really picked up for me. Much of the beginning was Broen and Clarrisa and then you start adding in the other characters in the story. The sneaky stealing of Clarrissa from Broen and how he gets her back. There is plenty of action and wondering how it this ever going to work out because it seems pretty impossible. I really thought a time or two that Clarrisa was going to switch hero's on me. I really liked this and the fact that you weren't sure how it would end. I think you get a bit of a cliff hanger at the end. Hopefully for the next book? 4 out of 5 Modokker Book Pick Stars for The Highlanders Prize by Mary Wine.

This is available right now. Find out more about Mary Wine and her books on her website here www.marywine.com . You can read a excerpt for this book there too.
Posted by Modokker at 4/10/2012 01:00:00 AM