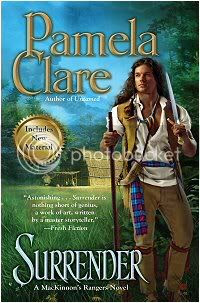 A hand-picked cadre of warriors, they had the fierce courage of their Scots forefathers, combined with the stealth and cunning of the Indians who lived beside them in the wilderness. Battling the French in no-holds-barred combat, they forged a new brand of honor, became a new breed of men…

Iain MacKinnon had been forced to serve the British crown, but compassion urged him to save the lovely lass facing certain death at the hands of the Abenaki. He’d defied his orders, endangered his brothers, his men and his mission, all for a woman. But when he held Annie’s sweet body in his arms, he could feel no regret. Though he sensed she was hiding something from him, it was too late to hold back his heart. In love and war, there are times when the only course of action is… Surrender.

This book was recommended reading by my friend and author Jenn LeBlanc. She gushed over this 3 book series by author Pamela Clare so i decided i needed to check it out and see what i was missing. Surrender is the first is the The MacKinnon's Rangers Trilogy. Iain MacKinnon is the oldest of the three brothers. Iain is forced into service and charged with forming a rangers to take on the french for the British Crown. Of course his two brothers Connor and Morgan can't let him go it alone. Iain becomes Major MacKinnon or Mack to his fellow rangers.  One day Iain almost literally runs into Lady Anne or Annie and Iain comes to know her. Annie is running for her very life and Abenaki Indians are after her. They've already killed and she's to be next. Iain's not supposed to let himself be seen but he can't help but save her.  This was a odd book for me. Not in a bad way. Just that is was different from other historicals I've read.  The twist if fusing the Scottish Highlanders with Mahican Indians was not something I've ever read before. The Scottish banter was interesting and done enough to get it without getting overwhelmed by it because let's face it after a while you want to rip your hair trying to read it. Loved the three brothers. They are close and as loyal as can be and that really goes for all the rangers. All with different personalities. There's more than one bad guy but the one guy  Lord William Wentworth you love to hate by the end. He's not all bad just partially bad. lol  It's really the love story of Iain and Annie that gets to you. The misunderstandings and the things they do to protect each other are huge.  You are pulling for them to get together and make it work. Pamela Clare puts this great ending on that Iain and Annie deserve after all they go through. 4 out of 5 Modokker Book picks for Surrender by Pamela Clare.

Find out more about Pamela Clare this book and her other works on her website www.pamelaclare.com .She writes more than just historicals so check her out. You can find excerpts to her books including Surrender as well as other fun stuff.
As a side note there is a newer version of this book with bonus material etc. I read the original version.
Posted by Modokker at 4/03/2012 01:00:00 AM