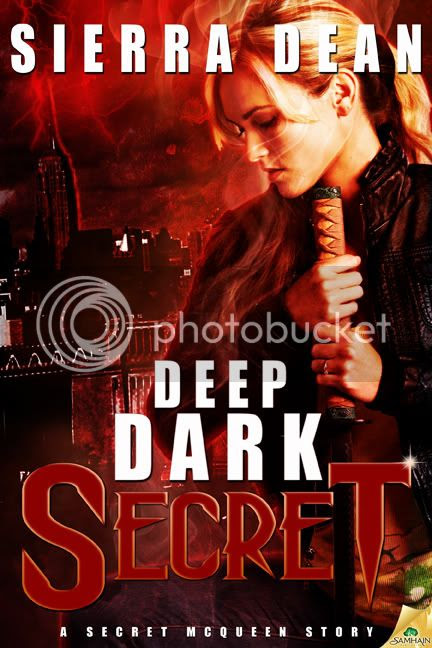 
Secret McQueen, Book 3
Coming March 6, 2012
The only good Secret is a buried Secret.

Secret McQueen has hunted vampires, werewolves, and every conceivable supernatural menace-to-society. Seen it all? Not even close. When the queen of the were-ocelots comes to her for help finding a missing girl, the half-vampire/half-werewolf soon realizes how much she has to learn about the things that go bump in the night.

The case of the missing cat is one thing. Pile it up with her new duties as a Tribunal Leader, her tenuous position as mate to the king of the Eastern werewolves, and a slew of new (and unwelcome) supernatural abilities, and Secret is once again in familiar territory. Way over her head. But for this multitasking half-breed, it’s business as unusual.

What knocks her for a loop, though, isn’t her lover’s intoxicating kiss. It’s the missing memories rushing at her from out of nowhere, signaling a rapidly approaching fork in her destiny. Her choice will affect not only her life, but her love.

Warning: Contains a werewolf king with wandering hands, a creepy English professor with nefarious plans, and one hell of an unexpected gala evening at Columbia.

This is the 3rd book in the Secret McQueen series but there are also 2 novella that go with this series. I've read then all and everyone has sucked me right in. There is something about these books that grabs a hold of me bythe  first chapter and doesn't  let me go to the end and i swear the end always sneaks up and hits me smack in the forehead. lol  It's like what? what? That's the end? There needs to be more. There is so much going on in these books. It's not really confusing as much as action packed. Secret is juggling at least 3 men although I believe Sig, her vampire boss likes her too. All of them know about the others but it's not her biggest problem considering all the other more nastier more threatening things orbiting her universe. This book is filled with plenty of action and plenty of super hot men. Secret McQueen is probably the most bad ass chick in books. The books give you a nice chunk of her story then cuts you off and makes you wait for more. It's thrilling and frustrating at the same time. I spend the time reading and wondering what's coming next because there is no way in hell i can guess.  I'm amazed with the writing and the story pulls me through at break neck speed to the end. Just wow. 5 out of 5 Modokker Book Pick stars for Deep Dark Secret by Sierra Dean

Find out more about these books and read a excerpt for Deep Dark Secret here www.sierradean.com These are all fast read in one sitting reads.