Book review: TRATR parts 1 through 3 The Rake and the Recluse a Illustrated novel by Jenn LeBlanc 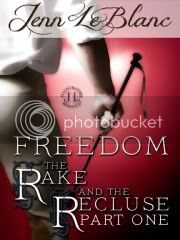 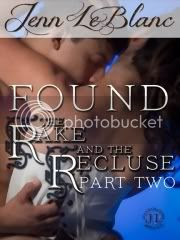 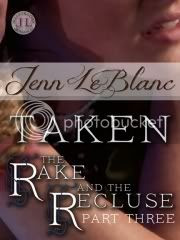 A woman out of time.

A man stifled by propriety.
A nemesis determined to take her away.
A brother to the rescue.

How will a powerful Duke deal with a woman who doesn’t know her place? How will a woman used to the 21st century survive in time where she is considered property?

Francine Larrabee woke up on the wrong side of the century. She was fairly certain she went to sleep in her own comfy bed, but she doesn’t quite seem to be there now. Only adding to her problems is that she has no voice, is constantly being glowered at by a large, stunning man who is obsessed with propriety, and she is apparently betrothed to another horrid little man, determined to ruin her, and any other girls that get in his way.

How does she find herself in the past, when she couldn’t even find herself in her present? How does a self sufficient businesswoman survive in a time when women were still considered property for the whole of their lives and what is she going to do with this man who draws her to him so fiercely.

This is kind of a new way of presenting a book. A illustrated novel. Pictures that go with the story. I wasn't sure about this because for me when covers don't match the story it kind of turns me off when it's really bad. Lucky for me though Jenn is also a photographer so all the photos in this novel are hers. I wasn't sure i would like this but I have to say once i started reading part one i loved the photos that went with it. It really enforces the story being told. Part one feels like a introduction too. You get some of the story but much of it is also explanations of things you need to know. Part two, I really started warming up to the story and really getting into it. I started to be able to connect with the characters and the secondary characters as well. By part three i was thoroughly engrossed and entrenched in the story.  Francine has no voice. It's damaged at the beginning of the story and you have to think how is that going to work? How can there be dialogue if she can't talk. They find a way. There's someone after Francine though so there is a danger element. The heat between Gideon and Francine is sizzling hot and the whole story is that much more intense with the photos that accompany it. You can't forget Perry though, Gideon's younger brother and the rake in this story. If you haven't figured it out that leaves Gideon as the Recluse. Perry might be a rake but he is always there for Gideon as Gideon is there for him as well.  As the story progesses both Gideon and Perry are changing. All from being around Francine.  You need to read the parts of this novel in order for it to make sense. Jenn LeBlanc takes you on a journey of words as a well as a journey in pictures. Together the two things make for excellent entertainment. 5 out of 5 Modokker Book Pick starts for The Rake and the Recluse parts 1 through 3. I am currently working on reading the last 3 parts and will review the second half of this illustrated novel here soon. Want to learn more? Check out Jenn LeBlanc's website www.jennleblanc.com . While there check out her many different facet's as author and photographer. It won't take you long to see how talented she is.