A WYOMING SKY NOVEL
The Truth Can Be an Irresistible Temptation . . . 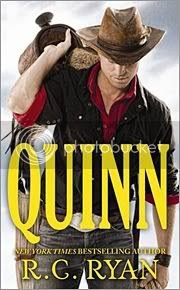 As a young boy, Quinn Conway was shattered by his mother's mysterious disappearance. Today, as the oldest of the Conway brothers, his only concern is protecting his family and their ranch. One look at beautiful, strong-willed Cheyenne O'Brien tells him she's also no stranger to tragedy. A series of increasingly dangerous "accidents" are plaguing her and her land, and Quinn can't stand idly by while a woman is in danger. Fiercely independent, Cheyenne isn't one to lean on others, yet she can't deny her attraction to the rugged rancher offering help. Soon, the passion building between them proves as wild and untamed as the land she loves-and just as impossible to resist. But a relentless enemy is about to make one final devastating move. To survive, Quinn and Cheyenne must put their cherished freedom-and their hearts-at risk . . .


This is a new series by author R.C. Ryan, otherwise known as Ruth Ryan Langan. A western set in the state of Wyoming. The book opens with a prequel to intro you to the characters in the series when Mrs. Conway disappears and the boys are left without their mother and Quinn who grows up to be a wolf whisperer has his first encounter with a den of wolves. There are three Conway brothers. Quinn the oldest then Josh the expert mountain climber who rescues people and Jake the baby and newly minted veterinarian. Because of his love for wolves Quinn is a wild animal expert. Tracking a den of wolves is what leads him to Cheyenne O'Brien.  Cheyenne has her own ranch she's been running on her own since the deaths of her parents and brother. Quinn ends up staying at Cheyenne's ranch when she kills one of his wolves and he thinks it's on purpose but in fact it was going after one her cattle. Since it's blizzarding out he ends up staying and from there a relationship blooms. Unfortunately there are several incidents at Cheyenne's ranch and the jury's out who is in danger Cheyenne or Quinn.  I thought it was pretty easy to figure out who the bad buy was in this story. I knew as soon as the character was introduced and i hate that. I like to be surprised right to the end but that rarely every happens, but this was pretty obvious. The other thing that bothered me is the main characters never tell each other i love you. I was sure it was coming several times but never happened. I do like this western series with brothers or cousins though so i will definitely continue to read this series as i have a few things i am hoping to see cleared up by the end of book three. This was a good book but not as good as I have read from R.C. Ryan so i am hoping the next two are a little better. 3 out of 5 Modokker Book Pick stars for Quinn by R.C. Ryan.