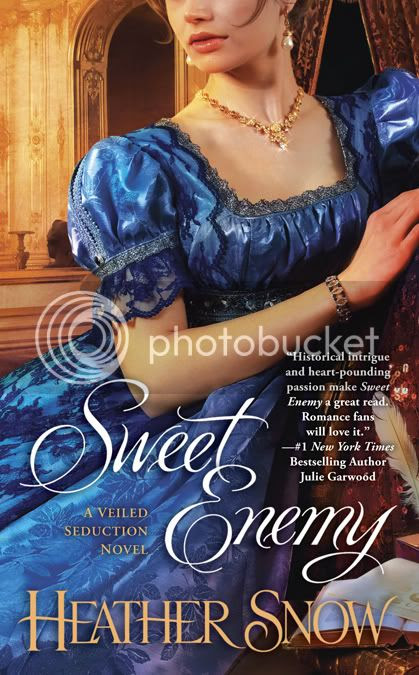 A Veiled Seduction Novel ~ Book One

Geoffrey Wentworth, a war hero and rising political star, never wanted to be the Earl, but when his brother dies, he knows his duty—take up the responsibility for his family’s estates. His mother’s definition of duty differs from his, however, and can be summed up in one word—heirs. When Geoffrey rushes home to answer her urgent summons, he finds himself host to a house full of women, all vying to become the next Countess of Stratford. But his love is Parliament, where he wields his influence and reputation to better the lives of ex-soldiers, until a tempting house guest and a secret from his past threaten his freedom…and his heart.

Liliana Claremont, a brilliant chemist, doesn’t want to be any man’s wife, much less a Countess. If she had tuppence for every time she’d been told her place was filling the nursery, not experimenting in the laboratory, she could buy the Tower Bridge. However, when she receives a coveted invitation to the Earl’s house party, she trades in her beakers for ball gowns and gladly takes on the guise of husband hunter—for the chance to uncover what the Earl had to do with the murder of her father.

Liliana believes the best way to get the answers she needs is to keep her enemy close, though romance is not part of her formula. But it only takes one kiss to start a reaction she can't control...


This is the debut book for author Heather Snow. I love being able to read a new authors first published book. It's kind of exciting to be able to read it when it's first coming out and maybe years later be able to say "yeah i remember her first book".  I have not read a historical romance in a while and in truth i don't read many of these that are not by Julie Garwood. One of her books was my first historical and i fell in love with them. All historicals are not the same though. I was intrigued by this one and decided it was time to try a new author's historical.  Did you follow all that? lol

I wasn't sure what to expect with this book. New author and for me anyway i love Julie Garwoods historicals i wasn't sure anything else could live up to my expectations. I love that the heroine is a chemist with a strong sense who she wanted to be and what she wanted to do. I love when woman get that respect from men in historicals. Geoffrey is kind of a hard ass in some ways but a softy beneath it all.  He is always trying to help his former fellow soldiers and he knows he needs to marry the right kind of woman who will help him get where he thinks he needs to be. Then came Liliana. She's not suitable at all. Twenty four years old and unmarried. Top it off a female chemist which is unheard of. Thing is Geoffrey a Earl and former soldier finds himself intrigued by her. She's different than any woman he's ever known. He can connect with her on a level he can't with anyone else. Liliana is on a mission though. Her father was murdered and she thinks someone in Geoffrey's family might be the one who did it. She convinces her cousin to get her aunt to help her get invited to a big party for Geoffrey to find a bride. She's sworn she'll never marry but this is the perfect way to find evidence to prove who killed her father. Unfortunately things don't go as easy as she hopes once she's there. She's expected to attend numerous activities with all the other woman there and it makes sneaking around hard. Liliana and Geoffrey keep butting heads at first but the more time goes on the more they find themselves intrigued with each other. It starts getting hard to keep that emotional distance they need.  Once everything is in the open and Geoffrey knows the real reason Liliana is there, will love exist or betrayal? Who is the real killer? I thought i knew but i was wrong. This book was a journey to find a killer that turns into a journey to find love. By the end i loved both Geoffrey and Liliana. Great first effort for Heather Snow! Look forward to more. 4 out of 5 Modokker Book Stars.

To read a the Prologue and first chapter to Sweet Enemy go to Heather Snow's website here www.heathersnowbooks.com
Posted by Modokker at 2/14/2012 01:00:00 AM