Book Review: Until there was you by author Kristan Higgins 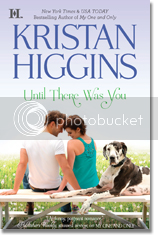 UNTIL THERE WAS YOU

October 25, 2011
Available at Barnes and Noble, Amazon and Indiebound.

Posey Osterhagen can't complain. She owns a successful architectural salvaging company, she's surrounded by her loveable, if off-center, family and she has a boyfriend—sort of. Still, something's missing. Something tall, brooding and criminally good-looking...something like Liam Murphy.

When Posey was sixteen, the bad boy of Bellsford, New Hampshire, broke her heart. But now he's back, sending Posey's traitorous schoolgirl heart into overdrive once again. She should be giving him a wide berth, but it seems fate has other ideas...

This was such a good book. I laughed i cried it had it all. Liam Declan Murphy. The name sounds sexy doesn't it. The man is too. Liam had a terrible childhood but a good heart he kept hidden for the most part. Posey got to see glimpses of it when they were young and still in high school. She has a huge crush on Liam but Liam fell for another girl and fell hard.  He broke Posey's heart with some nasty comments about her when she thought that they were at least friends. Fast forward years later and Liam is back in town with his 15 year old daughter and a now a widower. Posey is still struck by him but she is older and wiser and no ones sucker anymore. Liam has changed a lot too. Because of his wife's sickness and death and a near brush with his motorcycle he is now prone to terrible panic attacks and OCD it seems. He is over the top protective of his little girl because he is afraid of losing her and he feels she is the only thing he ever did that was good in his life. Little by little though Liam starts to see who Posey is. He likes her. She's different. Posey is wary but interested and then hell, she falls in love.  Then a series of bad things happen that throws Liam into a bit of a tail spin and he throws it all away. Now what? This book had great characters. A few i wanted to slap silly a few dozen times but real and believable. I seriously did alot of laughing and i usually didn't see that coming when i did. Yeah, yeah i cried a bit too. Sigh..... lol The end was just to damn sweet. The last line really got me. This is my 2nd Kristan Higgins book and the best of the two so far. I love love loved Posey. I could totally be friends with a woman like that. Lots of sass and loyalty. 5 out of 5 Modokker Book Pick stars. To find out more about this book and Kristan Higgins other books and read a excerpt click here kristanhiggins.com
Posted by Modokker at 10/27/2011 01:00:00 AM