Sarah and i are both going to offer up our review of this book. Fair warning we're both fans of Christine Feehan. Sometimes that's a hard thing though. I wonder if i my expectation will be met. Let's see how we did. 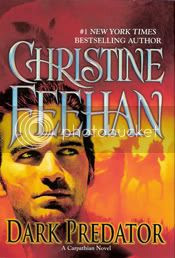 
As brutal as the undead he hunted, Zacarias De La Cruz was a master executioner. Now his stark and savage journey has ended. For his brothers, Zacarias had walked to the edge of madness, but with centuries as a killing machine now left to the past and without a hunt to define him, Zacarias wonders, for the first time in his life, who he really is.

The answer awaits him back home, in Peru, in the betrayal of a woman who is readying her trap, in the vengeance of an old enemy, in the inevitable consequences of a bloody family legacy-and in the deliverance of a lifemate he never could have imagined...


Sarah's Review: First, I need to admit I am a Christine Feehan fan. I really love her Dark Series, the Ghostwalker Series, and her Leopard Series (oddly enough, I'm not so fond of her Sea Haven Series - go figure.). That being said, they are all essentially the same. The woman has a format and believes in sticking to it. For example:
Incredibly hot, aggressive, alpha male - check.
Beautiful, young, virgin/almost-virgin psychic female - check.
Hero and heroine have a psychic-type link creating an intense bond and really HOT sex - check.
Bad guys (vampires, megalomaniacal billionaires, evil, rotten humans) - check.
Fast paced action with lots of nature/wildlife background and awesome battles and weapons- check.


But her characters, and the entire worlds she creates, are so vivid and well-described that I feel like I'm in the rain forest, or a deep cave, or the ocean. I feel connected to her heroines, and care about the heroes. So reading one of her books is both entertaining and very familiar.


I was really excited to read about Zacarias De La Cruz, one of the oldest and darkest of the Carpathians hunters. The identity of his lifemate was a much debated question on the internet prior to the book release, and I certainly never guessed who it would be - well done, Ms. Feehan!

At its heart, Dark Predator is truly the intimate story of Zacarias and his lifemate, how they come together, fall in love/lust, and begin their relationship. Most of the other Dark books have sub-plots involving the battles of Carpathians against the vampires and some mages who are trying to destroy the Carpathian species. But Zacarias is unlike most other hunters, and the discovery of his lifemate as he is trying to die honorably shocks him. He quickly realizes that he is not like other Carpathians, and his relationship with his lifemate will not be the same as others of his species. I really appreciated how the author handled the fact that Zacarias is about a thousand years old, has avoided almost all human and Carpathian contact for centuries, and has spent the last half-millennia in South America. So the guy has zero people skills and thinks of women as objects. His attempts to "rule" his lifemate, while probably realistic, became pretty repetitive ("I will rule you" is a frequent quote). I found myself missing the steady action of most of her previous books. Feehan's writing often veers off the path of paranormal romance and skips along the edge of straight-up erotica, and I would argue that is the case here, with dominant/submissive themes in play here. All in all, a solid entry in the series.

As with her other Dark Series books, this can easily be a stand-alone read, although reading the series in order is helpful for understanding the complex and layered history and relationships.

Wow you know. Sarah's right there seems to be a bit of a formula to this series but it's never bothered me.  I've read every book Christine Feehan has written as far as i know. I'm not sure what she has but i like it. lol I've been waiting for a long time for Zacarias story. I wondered how it would go and was excited to think it was going to be really good. Zacarias is about as close to the end as they come. He's been that way for a long time. He finally sees his brothers all settled with their lifemates and he's helped protect his race from terrible things and now is ready to let it all go and be done. He feels this intense need to go to his Peruvian ranch home so that's where he goes. You feel this anticipation as he gets there to who his lifemate might be and when he'll meet her. HA!! He meets her right away but things did not go as i thought they would. Marguarita who appeared in one of the other dark series books turns out to be his lifemate or is she?? Your kind of left guessing for a while because Zacarias does not exhibit all the usual signs that a carpathian usually does when they meet their lifemate. For me this book was a bit different in that Zacarias is kind of mean and it's explained that he was so close to turning and he had turned off his emotions for so long that he couldn't connect like he should. Didn't understand modern times. OK but still he was to mean for me. Kind of a let down for me there. Marguarita was one understanding women because not only does she get tossed around by Zacarias but by a couple of baddies as well. I felt bad for her. There were a lot of emotional moments. I kept waiting for it to click with Zacarias and i thought he'd never get there. This was not a easy love story but still in the end a good one. Christine Feehan really knows how to hit the details and bring wonder to her stories. The  only thing that was missing at the end for me was Zacarias taking Marguarita to meet his brothers and lifemates. That would've made my day.  4 out of 5 Modokker Books picks for Dark Predator by Christine Feehan. This one is not as romantic as the rest and the love story is one that was hard fought for by the heroine. Margauarita was really Zacarias saving grace.


For more information about New York Times bestselling author Christine Feehan and her many books, visit her wonderful website at www.christinefeehan.com. She has a wonderful members only section. Find excerpts on all her books and read the first chapters too.
Posted by Modokker at 10/20/2011 01:00:00 AM