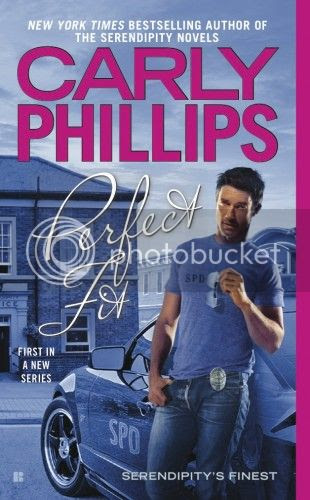 This is book 4 of serendipity series, first in what will be called  Serendipity's Finest which just distinguishes it from the Barron brothers. It's 3 books about three siblings in Serendipity - police chief and his family. Book one's heroine is Cara Hartley who readers met in Karma.


Out in January of 2013. Something to look forward to. Up for preorder at Amazon and B&N so far.
In the picturesque town of Serendipity, New York, three siblings have grown up in the shadow of their proud and respected police chief father. But what do love, fate, and fortune have in store for the next generation of Serendipity’s finest?


Always feeling like the odd man out in his family, Michael Marsden wanted to make it on his own. So he escaped Serendipity to become an undercover cop in Manhattan, where the Marsden name wasn’t known. But Michael’s independence is compromised when he returns home to replace his sick father as chief of police. Back in the shadow of his family, he’s as lost and restless as ever, until he’s challenged by someone he never anticipated.

Cara Hartley is the Serendipity cop with whom Mike had a one night stand three months earlier. Neither expected anything more but fate has other things in store. When Mike returns as Cara’s boss, the sexual tension between them is impossible to ignore – and the unexpected emotional connection continues to grow. But Cara’s a small town girl while Mike has a wanderer’s blood in his veins.

Both are convinced a future together is impossible. Until Mike’s real father’s secrets come back to haunt him and he realizes there are some things worth staying and fighting for. Including Cara.

Find out more about the series and the books already out on Carly's website here www.carlyphillips.com
Posted by Modokker at 8/27/2012 01:00:00 AM