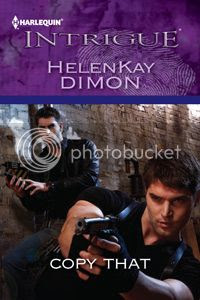 HE GAVE NEW MEANING TO THE TERM DOUBLE AGENT


Returning from his latest Border Patrol assignment, Jeremy Hill seeks sanctuary in his twin brother's home. The last thing he expects to find is and armed man already inside, or Meredith Samms, a gorgeous tenant caught in the cross fire. Then he discovers that the gunman's attack is meant for his twin brother, who is nowhere in sight, and Jeremy must take matter into his own hands. Searching for his brother while trying to protect this girl next door, Jeremy finds himself caught up in the danger he'd become all too familiar with. in his world, everyone's a target and anyone can be a suspect, so Jeremy has no room for emotions. But what Meredith stirs within him may complicate this unexpected mission to the point of no return...

I literally bought this book today while checking out the book isle at Walmart. I was lucky enough to meet Helen Kay this past June and hear her talk at a conference. I think this is only my second book by her but i saw this cover with the um..... sexy TWINS on it and so that made me pick it up and read the back cover. I'm a bit of a sucker for military guys so i decided i need to read it. Sat down when i got home and started reading. This is kind of like two stories in one. It starts with Jeremy Hill meeting his twin brother Garrett's upstairs neighbor Meredith when someone breaks into his brothers home and she gets caught in the middle of it. Later we finally meet Jeremy's twin Garrett and his estranged fiance' Sara. What follows is a action packed story with the two couples and Garrett's team dodging the bad guys and trying to figure out who the mole on the team is. Someone is telling the baddies exactly where they are and what they are doing. Questions is who is the mole and which brother is the bad guy after. With both men having numerous enemies due to their jobs it's hard to say. With twin brothers it's double the sexiness in this Harlequin Intrigue. Can the pair of Alpha men sort out their hearts from their need to protect to get the women?? Fun read! 4 out of 5 Modokker Book Picks for Copy That by Helen Kay Dimon.

Find out more about Helen Kay Dimon and her other work here on her website where you can read the first chapter of this book as well .www.helenkaydimon.com