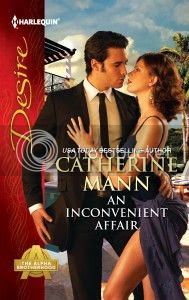 
Hillary Wright has always been a magnet for Mr. Wrong. Her latest left her in trouble with the law, and to clear her name, she’s agreed to an undercover sting—as the “date” for infamous Troy Donavan. The notorious hacker is now a government good guy…and a sexy billionaire playboy. Troy has a reputation as the sort of man she’s vowed to avoid, and his secretiveness adds fuel to Hillary’s distrust. But with his kisses like molten sin, her fierce resistance is melting. And being sensible in the face of such overpowering desire is just not an option.

The Alpha Brotherhood: Bound by an oath to make amends, these billionaires can conquer anything… but love.

I just recently started reading Catherine Mann and i have discovered whether she writes a full size book or one of these smaller Harlequin books with around 200 pages she knows how to pack them with exceptional writing and plenty of action. Poor Hilary always seems to have the worst taste in men and her latest boy friend has gotten her in trouble with the law. Now she's trying to help out the government to put him behind bars and clear any suspicion that she was helping him. This puts her in contact with Troy who has a bit of a sketchy past of his own he can't live down. Busted at 15 for hacking into files to expose some corrupt men got him sent off to military reform school. It ended up helping him find some really great stand up friends and a purpose for his life. A family since his own didn't seem to care enough about him. Troy falls for Hilary pretty quick but he has trust issues and social issues from his childhood that cause him problems when dealing with her. Hiliary has some trust issues herself as her mom was and is a alcoholic and her dad was her enabler until he passed away. Her one bright spot was her sister. They've tried to be there for each other over the years. After a several great days together and building a little trust between them while waiting for the bad guy to get caught it all falls apart with one lie. I loved Troy. You feel for him and Hilary with their trouble childhoods and their parents failings of them. Catherine Mann paints a clear picture of their pasts and makes you roots for them. Really enjoyed this past paced book. You feel like your getting more than 200 pages the story is so rich in detail. You also get introduced to Troys fellow reform school friends and hopefully we get their stories in the near future. Can't think of anything i didn't like about this book.  5 out of 5 Modokker Book Pick stars for An Inconvenient Affair by Catherine Mann.

Find out more about Catherine Mann and all her other work as well as this one on her website here. www.catherinemann.com