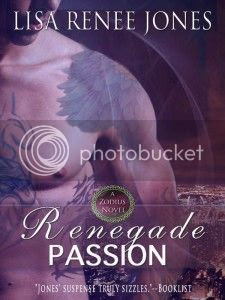 Warning! Sexy alpha soldier out to protect his woman! There will be sparks that fly and plenty of sexy moments!

Sonia’ a gifted psychic who finds herself seeing visions of the many women who have started disappearing around Vegas. Visions that have now put her on the radar of Adam Rain, a soldier who was part of an experiment that made him a super solider, powerful and dangerous. Adam wants to control the city. He wants to control her.

Kel is also one of those super soldiers, a part of the unit called Renegades who fight to protect humanity. A soldier who once planned to call Sonia his wife until an Area 51 experiment changed his life, his future, Sonia’s future. But now she is in danger, and nothing, and no one, is going to hurt her. She is his passion, his desire, his heart.

The man she believes is dead.


Get it free today only! www.amazon.com/Renegade-Passion-Zodius-Series

Find out more about Lisa Renee Jones and this book www.lisareneejones.com