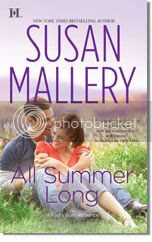 Can a summer fling turn into love that lasts a lifetime?

Former underwear model turned entrepreneur Clay Stryker has loved, tragically lost and vowed that he’ll never risk his heart again. After making his fortune, the youngest of the rugged Stryker brothers returns to Fool’s Gold, California, to put down roots on a ranch of his own. But he’s frustrated to discover that even in his hometown, people see him only for his world-famous…assets.

Firefighter Chantal (Charlie) Dixon grew up an ugly duckling beside her delicately beautiful mother, a feeling reinforced long ago by a man who left soul-deep scars. Now she has good friends, a solid job and the itch to start a family—yet she can’t move toward the future while she’s haunted by painful memories.

Clay finds an unexpected ally, and unexpected temptation, in tomboyish Charlie, the only person who sees beyond his dazzling good looks to the real man beneath. But when Charlie comes to him with an indecent proposal, will they be able to overcome their pasts and find a love that lasts beyond one incredible summer?

This is the 9th book in the Fools Gold series by Susan Mallery. So far it's not getting old. I read this in one day. Lost some sleep but it was worth it. lol You meet the Stryker boys a couple of books ago and this is one inlcudes the youngest, underwear model and but double Clay Stryker. Clay did really well as a model. Made some really good money and went to college for business. Loved and lost a woman he deeply loved. He's decided it's time to move on and do something else. He moves to the family ranch to be closer to family and join the fire dept as a volunteer and start a new business. Problem is no one sees how serious he is. They only see the sexy gorgeous model and think he's all about fun and games and sex or they hope anyway. Clay gets up close and person with resident firefighter Charlie Dixon when she falls on him from a later saving a cat. Charlie is kind of a tom boy but part of the reason she is the way she is is because her mother was a prima ballerina and never thought Charlie was pretty enough or good enough adn was downright just jealous of her daughter. Let her know it at every turn. She is one of those self obsorbed people who think nothing is good enough for them. She also was raped in college and no one believed her so her self esteem and her heart were ravaged on two fronts. Charlie asks Clay to help her be normal whatever that is. She wants to be able to be intimate with a man and at some point either have a child of her own or adopt one. What starts out as help turns into passion and even though neither one was looking for love it finds them anyway. I loved this one. Clay is a sweetheart until he figures out he's in love with Charlie and scares himself.  Clays lessons for Charlie are HOT to say this least.  You have to insert Charlie's mom into the story some too. She finally realizes she alone and she wants to have a relationship with her daughter. It takes almost the entire book for her to get a clue and i wanted to kick her butt several times but she finally comes through. Looks like she's sticking around Fools Gold so it should be interesting having her around. 4 out of 5 Modokker Book Pick Stars for All Summer Long by Susan Mallery.

Find out more about Susan Mallery this series and this book on her website here www.susanmallery.com