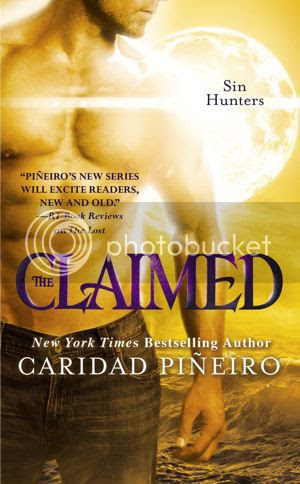 Victoria Johnson loves her life. She’s her own boss in a quaint beachside town, and has great friends who keep her grounded. If only they knew who she really is: an heiress to an ancient race who possesses astonishing superhuman powers. It’s Victoria’s duty to restore her clan of Light Hunters to their former glory by choosing the perfect mate. In Christopher Sombrosa, she just may have found him. Strong, smart, and successful, Christopher exudes a powerful energy. Their connection is sensual, irresistible-and forbidden.

This is my first Caridad Pineiro book. Book 2 in the Sin Hunters series. I have been told it can be read as a stand alone. Probably possible but i felt like i missed something somewhere. This took me a really long time to read. Longer than most. Victoria and Christopher are future leaders for their clans. Their individual clans have been mortal enemies for years though. What if they could join together as a couple and mate for life? Could they bring the clans together. Could they stamp out the disease permanently that has riddled Christopher's clan for a very long time. While they are sorting out their feelings though a few people are working against them. Jealousy and power push against their efforts to have peace. I liked the book and but had a hard time getting into it. I was right there on the edge but just couldn't quite catch the excitement i hoped for. Couple of the characters bugged me to death. Maya and Raphael drove me nuts. I get that Maya's affinity is sexual but it was to much for me. Perhaps she gets redeemed in the next book. Something was missing from the story but i can't really put my finger on it. The end suddenly came quickly too which through me.  Seemed like we were never going to get there and then suddenly there it was. I would still  like to read book 1 and see where the series goes. 3 out of 5 Modokker Book Stars for The Claimed by Caridad Pineiro.

Find out more about Caridad Pinero and her books here on her website www.caridad.com