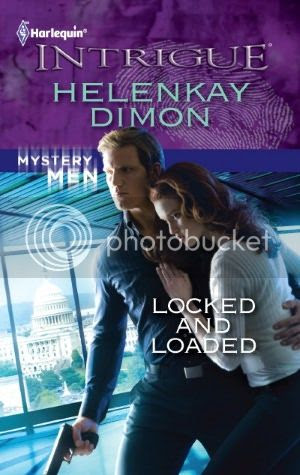 Publisher's Blurb: Nothing was as it seemed… Not even the protection Maddie Timmons was promised when she'd entered the Witness Security Program. One of her handlers was missing, the other had burned her, and now Maddie was at risk. All that stood between her and certain death was one sexy stranger.


Deep undercover, Recovery Project agent Adam Wright vowed to keep Maddie safe from the leak at WitSec. But Adam wasn't prepared for the confident woman he'd rescued, the sensuous lover who got under his skin. He could do nothing about her past being taken away, but he'd do anything to secure her future …even if it meant forsaking his own….

Review: Locked and Loaded (Harlequin Intrigue Series #1297, and Book 4 of the Mystery Men series following the men of the Recovery Project), was published in August 2011. The Recovery Project is a former government agency that has gone independent. According to the author's website:

"The series follows the men of The Recovery Project, a quasi-governmental operation established to locate missing people – those who want to be found and those who don't. After the Project's cover is blown, and under extreme pressure from members of Congress, the group disbands. But a conspiracy in the Witness Security Program, WitSec, puts the group back in business. The books are an equal mix of emotional romance and heart-stopping suspense. The sensuality level is sexy but not graphic. The books are available in print and digital formats."

This romantic suspense is a great little package, combining a sexy, strong and capable hero, an equally smart and capable heroine, a plot chock full of danger, suspense and a well-crafted romance. Both the main characters are so believable and likeable. Maddie suffers from chronic back pain and does her best to stay in shape to be prepared for her former boyfriend hunting her down. Although she in is the witness protection program she has always planned for the worst, and when that happens she meets Adam, a seriously sexy and deadly protector. She takes a chance and trusts him - a little -and he is shocked at how capable she really is. His respect for her has grown over the month he's been watching her, and when they're under attack he in turn shocks her with his deadly skills. But she doesn't know who to trust, and her growing sexual attraction and affection for Adam is not going to get in her way if she can escape. After a really intense few days - Adam is shot and left for dead, Maddie is sold, and there are firefights and excitement and rescues - Adam and Maddie have given in to their attraction, but Adam doesn't trust Maddie, and Maddie can't live with that. Adam's stubbornness and Maddie's need for Adam to say certain things felt a little awkward and the lovebirds almost break up. Never fear, the HEA is there, and Maddie and Adam quickly work through their issues.

As a new reader to the Mystery Men series I did get confused at times telling the good and bad guys apart, and figuring out the Recovery Project. I think I would have enjoyed it more if I read the series in order, although it was a very good read on its own.

Find out more about HelenKay Dimon on her website here www.helenkaydimon.com
Posted by Modokker at 7/05/2012 01:00:00 AM