Book review: Until There was you (Book 2 Coming Home) by Jessica Scott 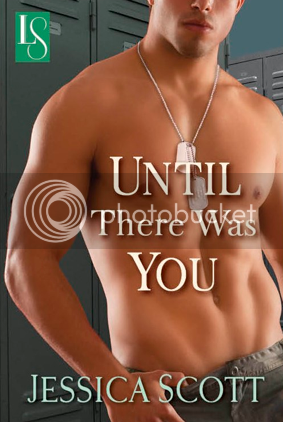 A by-the-book captain with a West Point background, Captain Evan Loehr refuses to mix business with pleasure—except for an unguarded instance years ago when he succumbed to the deep sensuality of redheaded beauty Claire Montoya. From that moment on, though, Evan has been at odds with her, through two deployments to Iraq and back again. But when he is asked to train a team prepping for combat alongside Claire, battle-worn Evan is in for the fight of his life.
Strong, gutsy, and loyal, Captain Claire Montoya has worked hard to earn the rank on her chest. In Evan, Claire sees a rigid officer who puts the rules before everything else—including his people. When the mission forces them together, Claire soon discovers that there is more to Evan than meets the eye. He’s more than the rank on his chest; he’s a man with dark secrets and deep longings. For all their differences, Evan and Claire share two crucial passions: their country and each other.


This is book 2 in Jessica Scott's Coming Home series. You can read these as stand alone books without any issues. Evan appears to be a by the book kind of strict military man, but Evan has issues. Something that happened when he was still a young man has shaped his life to what it is now. It's like he doing penance by controlling himself in every situation. To do what's right and be his best. Then there's Claire. Clare had issues growing up too. Secrets she hasn't shared with anyone. Little by little Evan breaks through to Claire and although she resists at every turn Evan is a little irresistible. This book is heavy on the military life. If this interests you then you will enjoy those parts. It was a struggle to watch Evan and Claire sometimes. Really it didn't look good for them for most of the book. Finally though they both figure out how to get past their insecurities and their pasts to get to where they want to be. Neither Evan or Claire were that likable at first but grew on me throughout the book. I think part of that is there were so damaged that they didn't know how to love at all. If you liked your characters tortured and messed up this is a great book for you. The epilogue was the best part of the book for me. I am so glad that Ms. Scott did that. Pulled it all together to give it the ending it needed. 4 out of 5 stars for Until There was you by Jessica Scott.

Find out more about Jessica Scott and her other work on her website here www.jessicascott.net
Posted by Modokker at 11/01/2012 01:00:00 AM

Email ThisBlogThis!Share to TwitterShare to FacebookShare to Pinterest
Labels: Because of you, Jessica Scott, military, Until there was you