Book review: Once Burned (Close to the Heat book 1) by Dee Carney 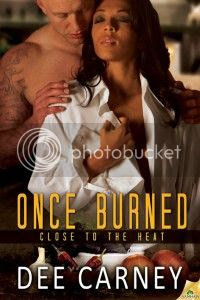 Once Burned
Temptation never tasted so good.
Close to the Heat, Book 1
With a chance to win a cooking competition that will advance her career, the last thing food truck chef Pepper Joseph needs is a distraction. Except she’s got a heaping helping of it in the form of fellow chef Darien Priest, the man who broke her heart.
It’s been years, and she tells herself she’s over his betrayal, but to her irritation, she finds she still has an appetite for his steel-gray eyes, clean-shaven head, and sleeve tattoos.
Darien regrets the single, juvenile act that ended it with Pepper, but he’s never found the courage to apologize. Now that they’re in close quarters, something’s steaming and it’s not just the saucepots. One toe-curling kiss proves there’s the potential for more than just a guarded friendship, and he sets out to prove he’s grown into an honorable man.
Until he discovers she’s pulled a seasoning switch that could have ruined one of his dishes. Now it’s on. There’s ten thousand dollars on the line, but if they don’t surrender to another chance at love, one—or both—of their wounded hearts could get singed.

This is my first book by Dee Carney. I have always wanted to read her but it just never happened until now. This is a short read that you can finish in one evening. Perfect size for those of you who don't want to still be reading at 1AM not that i have anything against that or don't do it myself now and then. lol Darien and Pepper have a history together from back in high school. Darien let peer pressure keep him from having a relationship with Pepper back then. He knew it was wrong and has regretted it for years now. It changed Pepper. Made trusting hard and being around him now hard because even though she has forgiven him she can't forget. Now they are both in this cooking contest with their food trucks and being pushed at each other constantly because of it. They want each other but mistrusts is a tough thing to conquer. Darien tries several times to breech that gap and comes close he thinks a time or two but then it falls apart. I liked this story. I don't read many cooking stories and never one that involved food trucks. My only experience with them personally was in the Army and they called them gut trucks then. Nothing foodwise as good as what's being cooked in this book. I imagine other places they must have these though. In this book Darien has to wrestle with what he did all those years ago and who he is now and try to get Pepper to see who that is now. Pepper just can't seem to let go. She says she forgave him but that's not quite true and now they are both tied to win the $10,000 prize money. Is Darien sincere or just trying to get past her and win the money for himself? Fun little read with some great secondary characters to go with it. I'm up for more Dee Carney in the future. 4 out of 5 stars for Once Burned.

Find out more on Dee Carney's website here www.deecarney.com
PS. Dee has several free reads on her website so be sure to check them out as well.

Email ThisBlogThis!Share to TwitterShare to FacebookShare to Pinterest
Labels: Close to the Heat series, contest, cooking, Dee Carney, Once Burned