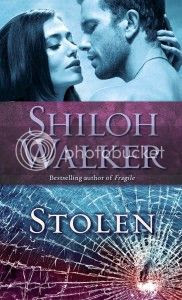 Shay Morgan has stayed hidden for a long time. Living a reclusive life in Earth’s End, Alaska, she’s as far away as she can get from the trauma of her childhood and the man who hurt her long ago. But terror takes over Shay’s life yet again when an unknown stalker steals away the fragile peace she’s built for herself—targeting not only her but the one man who’s ever managed to get past the walls she’s built around herself.
Elliot Winter has lived through being falsely accused before—it ruined his military career. Now it’s happening all over again. And this time, his accuser is a twisted impostor who’s targeting his ex-girlfriend, Shay. Despite a fierce mutual attraction, Shay and Elliot broke up because Shay couldn’t let her guard down, couldn’t let Elliot in. But now they both need to trust each other to confront a psycho who seems to know all their secrets.

This is my first Shiloh Walker book. I have heard really good things about her books so i was excited to give one a try. I do enjoy my romantic suspense but this book is one of those that kicks it up a notch in the intensity.  Shay first four years of life is pretty much a blank. She can't remember but tiny bits and pieces. Just enough to haunt her. Her step father blamed her for something but she wasn't sure what. She was taken in at age 4 by a wonderful social worker and adopted. All that changed when she hit 16 and her step father got out of prison and found her. He beat her adoptive mother to death and kidnapped her and did terrible things before she got away.  Two years later when her stepfather was sent back to prison for what he did she simply disappeared.  Now in Alaska she's write of thrillers. She pretty much thinks she's anonymous.  Only 2 people know who she was back then. Doesn't mean she's still not having trouble dealing with everything. She has nightmares about her past that she can't explain. Luckily she has a wonderful man named Elliot though and when things get really bad he's there to help her. It didn't take very long to figure out who the bad guy was in this book so i kept waiting for me to be wrong lol. It didn't happen but there is still a bit of a twist towards the end even though it's not really a big revelation how it comes out.  This book is gritty and intense in some places. Little more than i like but pushing beyond what your used to is always a good thing. The characters are well fleshed out and you just want to hug Shay. Shay may have some pretty big demons in her closet but Elliot has a couple as well that they have to deal with. Shiloh Walker does a thorough job and getting all the details right. My one small problem would be it lagged just a little about halfway through or more. I knew who the bad guy was but it seemed to take to long before the characters did anything logical about it. It is fiction though so it isn't a what would i have done thing. lol 4 out of 5 stars for Stolen by Shiloh Walker.

Find out more about this book and read a excerpt on Shiloh Walkers website here www.shilohwalker.com
Posted by Modokker at 11/28/2012 01:00:00 AM