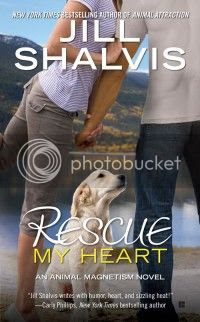 
After a tragic stint in the National Guards, Adam Connelly returns to Idaho and to Belle Haven, the animal shelter he owns with his brothers. All Adam wants is to be alone. Then he opens the door to the past—the woman whose heart he once broke. Still gorgeous, still tough-as-nails, but this time, unusually vulnerable.
Holly learned the hard way to never depend on a man for anything. Now, of all men, it’s the last one she wants to see, and the only one she needs. Her father has gone missing in the Bitterroot Mountains and she could use someone with tracking skills to help find him.
For Holly and Adam, each with their ghosts, a trek this desperate, this unpredictable, and this intimate, will have its share of risks—including opening their hearts one more time.

This is the 3rd in the Animal Magnetism series. We've had to wait for months for each other of these and they have been soooo worth the wait. I adored the first two in this series and Rescue My Heart tops the first two by a smidge or two. In the first two books you get a pieces of Adam. He's a man in control of his life or so it appears. He's capable of a little humor but mostly he's very serious. He's really suffering from PTSD from his time in the military. He's a was on a rescue team on a mission that went horribly bad and he lost half his team.  He's been trying to work on dealing with that with the help of his brothers since he got back stateside. In walks Holly. No one knows it but he and Holly were at item one summer years ago in their youth. He left her for the military and never looked back. It killed him to do it but he thought he was saving them both. Now Holly is back and pissed at him all the time it seems.  He can't figure out why. It doesn't matter when she comes to him needing his help to find her missing dad in the mountains. Finally on their trek to find her dad does she get to ask him some questions and find out who Adam Connelly is now. Of course that's the beginning of Adam having to deal with his feelings for Holly and feeling in general.  I really loved this book. Jill Shalvis deals with A very serious problem with many soldiers returning from overseas duty with PTSD. Anxiety is a big part of that and you don't have to be in the military to experience that either as many people know.  The romance parts were sexy as hell. Jill knows how to use words that draw you in. I read this from beginning to end in one day. You don't want to put it down. Where in the previous books you like Adam but you don't know him. I felt that open up and i loved what i saw once it did. No matter how Adam has suffered he is still a strong person and does the right thing.  Definitely a book for my keeper pile. 5 out of 5 stars for Rescue my Heart by Jill Shalvis.