Book Review: The One That Got Away by Jess Dee 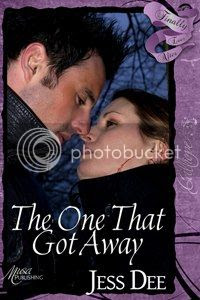 Sometimes its impossible to know whether he was the one who got away or the one you're definitely better off without...until he comes back into your life.

Lily Kember never dreamed a causal introduction to a friend’s friend would change her life, but three days after meeting Kai Jettison, she’s fallen deeply and irrevocably in love.

Kai falls just as hard, yet minutes after telling her as much he has no choice but to rip her heart to shreds, leaving whatever has blossomed between them lying in tatters on the ground.

It’s been five months since that fateful day. Five months of no contact. Now Kai is attending the same end of year bash as Lily, and bumping into him seems unavoidable. Lily’s choices are limited: either steel her emotions against Kai or risk losing her heart to him all over again.

Jess Dee proves in this short story that she is just a master of expressing emotions. She opens the story with a scorching scene between Kai and Lily. What I loved about it, is that Dee is able to show in just in a short scene that these characters have more than lust between them. Then she throws us a curve and breaks them apart before things can even really get started. Promises were made before they met, and Kai has to hold himself to his commitment. I love the way the story picks back up with Lily explaining to her friend about what happened a few months back with Kai. Now he is suddenly thrown back in her path and she can't let herself forget all those feelings she still has for him. Even though we don't get to hear the story from Kai's point of view, Dee is still able to express his feelings to make the reader believe that he has made a huge mistake. Although this is a short story and I never want Jess Dee's books to end, it leaves a feeling of being complete. The ending also left a promise for the future, which I just loved.
5 out of 5 stars for The One that Got Away by Jess Dee.

Email ThisBlogThis!Share to TwitterShare to FacebookShare to Pinterest
Labels: Jess Dee, The One that Got away