Book review: All he Ever Desired (Kowalski series book 5) by Shannon Stacey 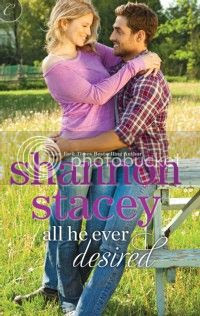 All He Ever Desired


A second shot at first love
After college, Ryan Kowalski decided to leave Whitford, Maine, rather than watch Lauren Carpenter marry another man. Now his siblings need his help to refurbish the family-owned Northern Star Lodge and he’s forced to face the past sooner rather than later when he collars a vandal—and learns the boy is Lauren’s son…
The last person Lauren needs back in her life is Ryan Kowalski. With a bitter ex-husband and a moody teenage son, she has enough man trouble already. But her son needs to learn a few lessons about right and wrong, even if Lauren has to escort him to Ryan’s door every day to work off his crime.
With all this close contact, Ryan and Lauren can’t deny the chemistry between them is as powerful as ever. But can a few searing kisses erase their past and pave the way for a second chance at true love?
This is book 5 in the fabulous Kowalski family series by Shannon Stacey. I think i have all these books but i think i am short on reading at least one. Need to fix that. Thing is you don't need to read these in order to like them. In book 5 Ryan Kowalski steps up front and center. It's his turn to bring his skills home to help the family. Being in construction he is the go to guy to fix up the Inn. This bring him in contact eventually with Lauren Carpenter whom he loved years ago and made a fool of himself in front  of before leaving town. Lauren is divorced from Ryan's best friend and has a 16 yr old son to think about. Once they finally reconnect the spark is still there and so they reluctantly begin a relationship. Problem is Ryan lives 400 miles away in another state. He's back to help fix up the Inn for a month but he's got a successful business to run and need to be there to keep it going. That's just one kink in the relationship but a big one still. I love how the relationship unfolds for Ryan and Lauren. Both are likable characters. They get thrown together more or less when Nick Lauren's son gets into trouble and has to work for Ryan. They have to figure out if after all these years this time they can make it work. Ryan doesn't want to have to walk away again. It's fun to see all the Kowalksi's together too for Paige and Mitch's wedding. A whole lot of Kowalski's packed into this book. 5 out of 5 stars for All He Ever Desired by Shannon Stacey . Any of the books in this series is a great read. Just start reading and you can't go wrong.