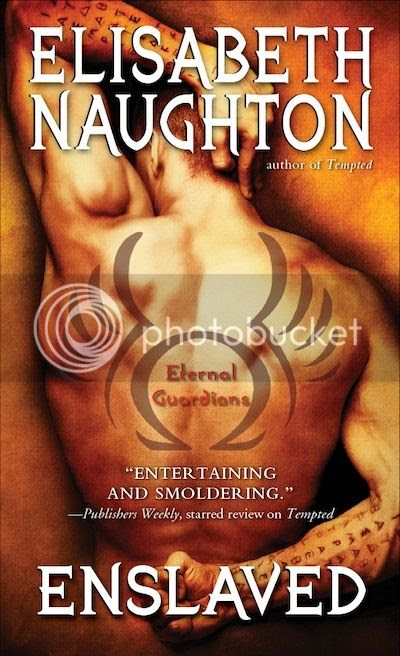 GRYPHON—Honorable, loyal, dependable…tainted. He was the ultimate warrior before imprisonment in the Underworld changed him in ways he can’t ignore.

She calls to him. Come to me. You can’t resist. But Gryphon will not allow himself to be ruled by the insidious whispers in his head. And there’s only one way to stop them: kill Atalanta, the goddess who enslaved him. But with so much darkness inside, he can’t be sure what’s real anymore. Even the Eternal Guardians, those who protect the human realm from threats of the Underworld, want to exile him. They’re not sure he can be trusted.
Finding Malea is like a miracle. Somehow he doesn’t feel the pull of the dark when she’s near. And he’s determined to keep her as near as possible, whether she wants him close or not. But proximity spurs temptation. A temptation that will test every last bit of control he has left. One that may ultimately have the power to send him back to the Underworld or free him from his chains for good.

This is book 5 in the Eternal Guardians series. At this point i have only read this one and the one before it. I plan on eventually going back to read the first three. I was afraid that i would have trouble not reading in order but so far i don't feel that's a problem. I'm sure it helps with the whole picture to do that though. I would recommend you read at least book 4 before trying 5. Enslaved will be much clearer if you do as the set up for Gryphon the hero of this book is set in book 4 which is Enraptured.You get to meet Gyphon and Malea in book 4 and if i remember they both had pretty decent size roles in that book. I never in a million years could see Malea as a strong female role as she is pretty meek in book 4. Both Gyphon and Malea are staying at the colony. Malea for her protection and Gryphon for the same reason but also to try and help him. In book 4 he is imprisoned in the underworld and put under a spell by Atalanta a goddess. He was forced to endure terrible things. His brother and his mate saved him with the help of Malea but he is still under the spell. The night Malea plans on running away from the colony Gyphon intercepts her while making his escape and plans to use her in that plan. Eventually they discover Malea keeps the voice of Atalanta that's always whispering in his head at bay. Both Gryphon and Malea learn who they really are and who they can be by being with each other. It's not always pretty because for a long while Malea is afraid of Gyphon and just wants to get away. They have to face dameons and hell hounds who are on their trail. Somewhere along the way they figure out they need each other and are mates. Malea totally becomes a kick ass heroine by the end and the love between then is so strong although it's hard won.  I thought Gyphon was going to blow it right up to the end though. I absolutely loved this book. 5 out of 5 stars for Enslaved!

Find out more about the book and the series including excerpts on Elisabeth Naughton's website here www.elisabethnaughton.com
Posted by Modokker at 11/20/2012 01:00:00 AM